In 1769, Eleanor Coade set up a factory in Lambeth creating artificial stone, which came to be known as Coade stone. It was extremely popular, with an illustrious list of customers including the King himself, George III. When it came to the improvements he was making in St George’s Chapel in the 1780s and ‘90s, this new material was turned to with several examples used in the chapel, notably the magnificent organ loft and figures on the West Front. 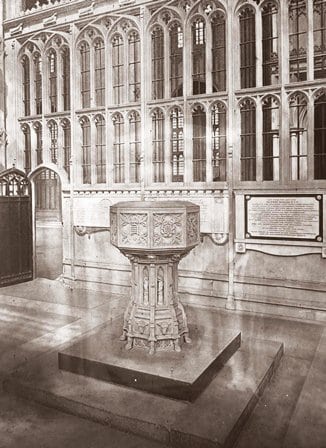 However, these were not the only Coade stone items to be included in the chapel, with a splendid font being provided as well, situated in the Bray Chantry. St John Hope, the great architectural historian, says in his magnum opus on Windsor Castle that it was destroyed in 1881 when the tomb of the Prince Imperial, son of Napoleon III, was placed in the Bray. But photographs exist of this font in the 1920s, some 50 years after its claimed destruction – so what is the true story of this font?

A very handsome Baptismal Font of Coade’s Artificial Stone has been placed there [Bray] by the Rev. Dr Majendie Jun’r one of the Canons.

Henry William Majendie was a Canon of Windsor from 1785 to 1798, following in the footsteps of his father John James who was Canon from 1774 to 1783. Tutor to the son of George III, the future William IV, he may have given this font as a token of gratitude for his appointment as Canon.

A bill from Eleanor Coade dated 1790 shows that she was paid £48 14s 4½ d for modelling a frieze for the Edward IV monument and a gothic font in St George’s Chapel [SGC XIV/1790/7]. The font itself is described in the catalogue of works of the Coade factory:

It had an octagonal base with “eight Gothic niches” containing statues based on paintings made by Sir Joshua Reynolds “for the grand window in New College, Oxford”. The figures represented Faith, Hope, Charity, Temperance, Fortitude, Justice, Prudence and Life. “Faith”, in the words of the catalogue, “standing fixedly on both feet, bearing the cross, the symbol of her belief, has her eyes and hands raised to heaven – while Hope, looking at the same heaven, appears springing forward to it so eagerly that her feet scarce touch the ground; part of an anchor, her attribute, is shown in the niche.”

An example survives at Debden in Essex, and apparently, when a copy was shown in the Royal Academy, the King asked for it to be sent to the Queen’s House (later Buckingham Palace) so that he and his family could look at it at leisure. It was a piece in which the firm was particularly proud.

A photograph taken by John Harrington in 1872 shows this font in the Bray, with an elaborate base of sheep’s heads and feet. St John Hope maintains that just 9 years later, it was broken up and buried underneath the grand monument to the Prince Imperial. 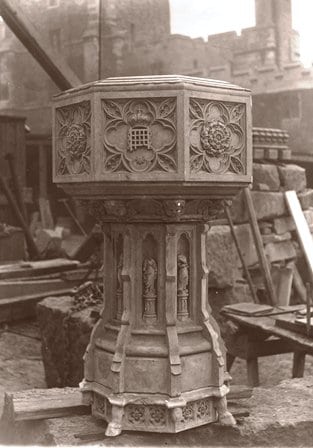 But this photograph taken in 1929 by Robert Burns Robertson, shows the font still intact, although with some minor damage. It cannot then have been, as described in the book Mrs Coade’s Stone, “smashed up for hard-core to support the monument”. So where did it go?

A bill survives from George Fountain, stone mason, dated 1881, stating that he was paid “for moving the font from the Bray Chantry Chapel to the South Aisle” [SGC XIV/1881/50]. So it was not broken up, but moved to another position in the Chapel.

Just 6 years after this bill, Canon Anson gave money for a font to be set up in the South Nave Aisle – the alabaster one which still stands outside the Beaufort Chantry. Perhaps the Coade one was unwanted, or considered old-fashioned by this time, and the decision was made to bury it. A.Y. Nutt, Chapter Surveyor from 1873 to 1912, states in his account books that money was spent in August 1887 on “Materials for laying paving in chapel, consequent on old font being buried“ [SGC XIII.A.8].

Whatever the reason, its rediscovery did not alter the Chapel’s opinion on it and it suffered again when rather than reinstate it, Robertson and his men reburied it “just inside and slightly to the east of the South door”.

It may not have been destroyed in 1881, but it still came to a rather ignominious end for what was once a celebrated part of the grand restoration of the Chapel under the architect King.