The recently mounted Archives exhibition in the south quire aisle – A Collegiate Community: the people of St George’s Chapel features Minor Canon Edmund Fellowes as one of its key characters. Among the items on display in the exhibition is an event programme from the Fellowes collection [SGC M.69/1/14]. 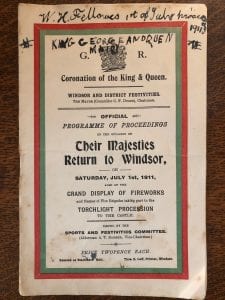 The programme is for the procession and firework display held in honour of the returning new King George V and Queen Mary to Windsor, 1 July 1911. A handwritten inscription along the top indicates that it belonged to W. H. Fellowes – William Hamilton Fellowes. He was only seven years old in 1911 and we can therefore excuse his spelling mistakes: “King George and Quen Mairy.”

William was the second of the four Fellowes children. He was born in No.5 Canon’s Cloister on 11 July 1903 and baptised in St George’s Chapel. At his birth his father had to run to fetch the doctor because telephones were still a rarity. The Fellowes family were part of a large community living and working at the College of St George. William and his father lived with William’s mother, Lilian Louise, and his siblings, Horace Frederick (b.1900), Arthur Edmund (b.1909) and Rosalind (1911), and several domestic servants including the children’s nurse.

In a document held in the Chapel Archives, William Fellowes recalled that his daily activities as a child included playing in the garden with his siblings, attending services in the Chapel and strolling along the Long Walk. He also noted highlights such as spotting the arrival of foreign royalty from the roof of the Guardroom and visiting the keeper of the bell tower, Mr William Wellbelove, to see the bells with his Nurse. He fondly remembered ‘Nurse’ Hannah Rebeckah Spencer, a Yorkshire woman whom he described as “a very clever person with a gift for making friends, particularly of policemen.” She never missed anything that was going on around the Castle and “was very good at getting a party going.” [SGC OFF XVI/31]

On 20 May 1910 during the funeral of King Edward VII, many families residing at the College were in attendance outside and inside the Chapel, including the Fellowes children. During the funeral Nurse Spencer was caring for William’s little brother Arthur, then only a little over a year old. William explained in his recollections:

“Our nurse had to remain in the house to look after my younger brother… Nevertheless, when the coffin was being carried up the steps to the west door of the Chapel, she rushed out, dodged round the empty gun carriage which by that time had been parked outside the house, broke through two lines of guardsmen, set the chair behind the low wall and stood on it with the child in her arms. On the cinema newsreel, this escapade stood out as a background to the procession moving up the steps.”

You can see her appearance in this footage from British Pathé [from 12:23].

The Fellowes family witnessed numerous historic and personal events at the Chapel. Edmund Fellowes served as Minor Canon during the reigns of five sovereigns. He witnessed an abdication crisis and two world wars. He also saw many changes around the College, including the installation of electricity and indoor plumbing. Happily he baptised three of his children, including William, and numerous grandchildren in the Chapel while he worked and lived at St George’s between 1900 and 1951. Their names are recorded in the Chapel’s baptism register. [SGC R.2].