The Military Knights of Windsor

The Military Knights of Windsor claim to be the oldest military establishment in the Army List. Formed by King Edward III shortly after the Battle of Creçy, the foundation consisted of Knights who, having taken their private armies to France to fight for the King, had been taken prisoner by the French who demanded heavy ransoms in return for their release. This often meant selling up their complete estates in order to raise sufficient money. 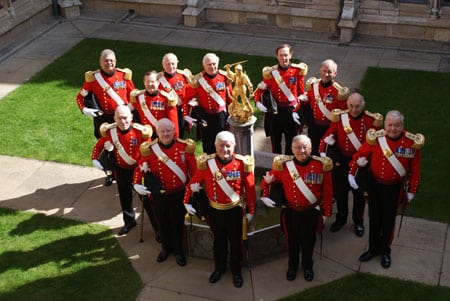 Known as the Alms Knights, they formed part of the College of St George which was created to support the establishment of the Most Honourable and Noble Order of the Garter. 26 ‘Poor Knights’, mirroring the 26 Garter Knights, were given accommodation in the Lower Ward of Windsor Castle in exchange for daily prayer in St George’s Chapel for, and on behalf of, the Monarch and the Garter Knights. All the Alms Knights were unaccompanied in their somewhat monastic existence in the Castle, though undoubtedly some must have been married.

Due to the decline in the number of Alms Knights once there was no longer a requirement for accommodation by ransomed landowners, King Henry VIII reduced the establishment to 13, and in accordance with his will, Queen Elizabeth I improved the accommodation of the Knights so that they were housed individually with one of their number appointed as Governor, and installed in the old belfry, now known as the Mary Tudor Tower. 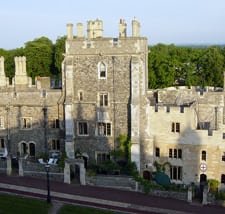 New regulations for the establishment and governance of the Alms Knights were drawn up under the Statutes of 1559. In 1833, King William IV, changed the designation of the Alms Knights to that of ‘The Military Knights of Windsor’ and at the same time granted them permission to wear uniform of Army Officers on the Unattached List. This dress is still worn today and comprises a scarlet tailcoat (in the summer), sword, sash and cocked hat with plume.

The Knights are all retired Army Officers dependent on their Army Pensions as, apart from a small stipend, they are not paid for their duties. It is usual for applicants to be married and preference is given to those in needy circumstances. Installation as a Military Knight will usually be before the age of 67. The individual has to be prepared to undertake the numerous duties expected of him over the year, most of which entail being on parade nearly every Sunday. The main event in the calendar is the Garter Ceremony when the Military Knights head this very colourful procession through the Castle precincts and into St George’s Chapel, the spiritual home of the Order of the Garter. Additionally, there are four ‘obits’ (Remembrances of College Benefactors) in the year, plus the occasional military funeral and the laying up of a Garter Knight’s Banner. A further duty involving the Military Knights is to be on parade for State Visits at Windsor Castle. On average, the Knights are on parade approximately 52 times in the year, in addition to which are a number of rehearsals. Most of these duties are linked to the Chapel, and only very occasionally are the Knights on parade away from Windsor. Some Military Knights undertake voluntary roles within the College and Castle.

The Knights’ homes in the Lower Ward of the Castle are theirs for as long as they can carry out their duties, and in most cases, this takes them to the end of their days.