The Diamond Jubilee at St George’s

The Diamond Jubilee at St George’s

During The Queen’s reign Her Majesty has attended many services, concerts and events in St George’s Chapel. They have ranged from the opening of St George’s House in 1966 to a service of celebration to mark 60 years since her installation as a Lady of the Garter and the 660th anniversary of the Order in 2008. Most years The Queen attends a service on Easter Day in St George’s but has also attended many unique services such as the memorial service for Sir Edmund Hillary and the wedding of The Earl & Countess of Wessex.   Her Majesty will attend the Garter Day service on Monday 18 June.  (See St George’s Royal Connection)

An exhibition in the Dean’s Cloister entitled ‘Our Diamond Queen’ ‘The Life & Work of Her Majesty as Princess & Queen’ will be in place from Saturday 26 May until the end of July. The exhibition (at the Chapel exit) is open Monday – Saturday during Chapel opening hours (10am – 4pm). The exhibition has been kindly sponsored by Stanley Gibbons Ltd. Windsor Castle Admission Charges apply.

On Sunday 3 June the bellringers rang a full peal (5040 changes of Grandsire Triples) to mark the Jubilee. A shorter ring took place on Saturday 2 June to mark the Coronation anniversary. The full peal took three hours and ten minutes without a break and was last undertaken in the Curfew Tower to mark The Duke of Edinburgh’s 90th birthday in 2011.  Click here to hear the bells ringing. 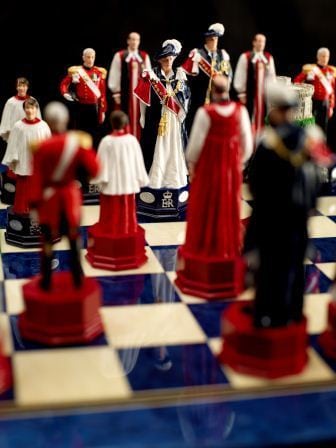 Services and events at St George’s marked and celebrated The Queen’s Diamond Jubilee. The main celebratory service was Evensong on Saturday 2 June.  The music at the Service included:

Introit – Dyson Be strong and of a good courage

and I vow to thee my country and the National Anthem. 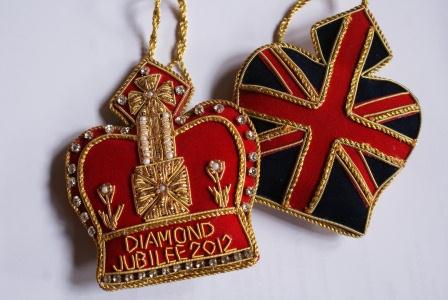 There was a Children’s activity trail in the State Apartments and St George’s Chapel from Saturday 2 June until Sunday 10 June (except Sundays in the Chapel). During their visit children were invited to spot where some small crowns had been placed.

A screen was placed in the Nave of St George’s Chapel on Tuesday 5 June in order that visitors could see something of the Diamond Jubilee Service in St Paul’s Cathedral.

As part of the Diamond Jubilee weekend, BBC One broadcast a personal tribute to Her Majesty The Queen by His Royal Highness The Prince of Wales. In this unique film The Prince reflected on various public events and private family moments during the sixty years of The Queen’s reign, and explored previously unseen photographs and cine films from Her Majesty’s private collection – many of them shot by The Queen herself. The filming featured St George’s Chapel and other parts of Windsor Castle together with Buckingham Palace, Balmoral and Highgrove. The film aired on the evening of Friday 1 June on BBC 1. Also over the Diamond Jubilee weekend a special edition of The Culture Show examined Royal Portraiture; part of the programme was recorded by Alistair Sooke in the Quire of the Chapel. 40 local BBC Radio stations broadcast a documentary over the Jubilee weekend which was partly recorded in St George’s Chapel.  The programme called ‘The Queen – 60 years of Defending the Faith’ was broadcast on BBC Radio Berkshire on Monday 4 June.