Many books and learned articles have been written on the subject of Heraldry.  These few short paragraphs and photographs are designed merely to hint at the range of heraldic decoration in St George’s Chapel by highlighting a few details that can be seen by visitors.

A full heraldic achievement is personal to one particular individual and consists of a design on a shield together with helm, wreath, crest, mantling, motto, supporters and other add-ons if entitled.  Badges can be used by one person and those in his or her service. 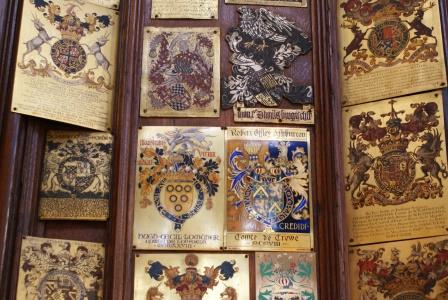 The photograph shows a selection of stall-plates which are fixed to the back of the stalls or seats of Knights of the Garter in the Quire of St George’s Chapel.  Although the banner, helm, mantling and crest are removed when a Knight dies, the stall-plate remains in place for perpetuity.  Therefore there are some stall-plates which pre-date the current Chapel (the Order of the Garter was formed in 1348 and the Chapel was begun in 1475) and some which are only a few years old.  Some examples show a full achievement; others depict only a shield. 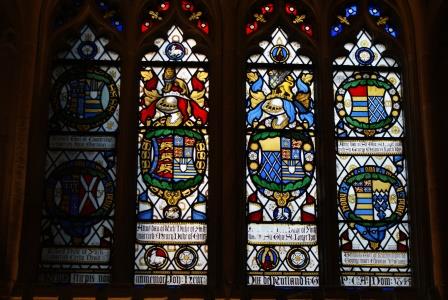 Stained glass in the North Quire Aisle shows the arms of Anne, daughter of Richard Duke of York and sister of King Edward IV, impaled on two different shields one with her first husband (the Duke of Exeter) and one with Sir Thomas St Leger whom she married later. In both cases the husbands’ arms are on the dexter side of the shield that is the right hand side from the point of view of somebody carrying a shield.  The glass is 19th century but it is near the burial place of Anne’s brother, King Edward IV. 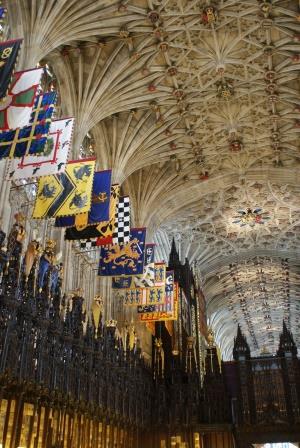 Over the stalls in the Quire are the banners of the living Knights of the Garter. Those seen in this photograph are, from the left, a corner of Lord Bramall’s banner, then Lord Inge, Sir John Major, Sir William Gladstone, Lord Carrington, Lord Ashburton, Sir Thomas Dunne and Sir Antony Acland.  Further to the west are the banners of four Stranger Knights (The Netherlands, Sweden, Denmark and Luxembourg). 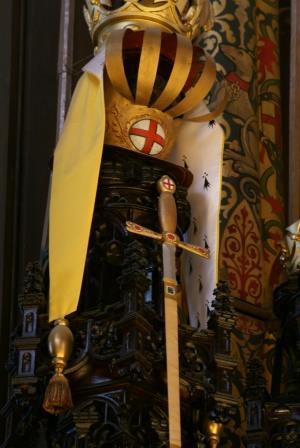 The helms now used over Garter stalls are display helms rather than ones that would have once been used in tournaments or war.  A helm is taken down after a Garter Knight dies but is kept by the College of St George and then re-used for another Knight as soon as the banner and crest are ready. Mantling is an artistic interpretation of cloth worn originally over a helm and shoulders to keep the sun off.  Royal mantling is gold with an ermine lining.  Ermine in heraldry is depicted as seen in this example from The Duke of York’s stall rather than being actual fur. 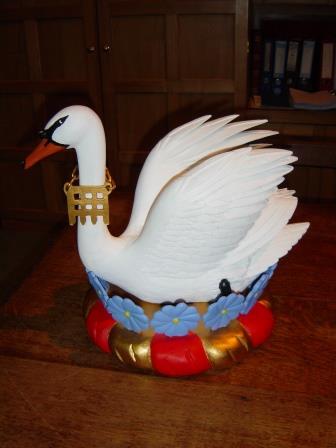 A crest sits on top of a helm. It was originally a further way, in addition to a cloth coat of arms worn over armour, of identifying an individual in battle or tournament.  This swan is the crest of Lord Luce and alludes to his time as Vice Chancellor of the University of Buckingham.  The coat of arms of that university includes a swan.   The portcullis is a reference to his parliamentary career and the plumbago to his holding the office of Governor of Gibraltar as, around the Governor’s official residence, is a hedge of plumbago. 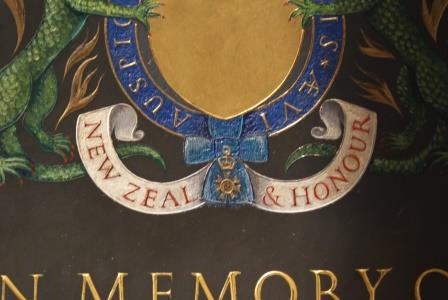 The motto ‘New Zeal and Honour’ can be read on the memorial plaque to Lord Freyberg  VC, GCMG, KCB, KBE, DSO***(7th Governor General of New Zealand and later Lieutenant Governor of Windsor Castle)  in the North Quire Aisle. 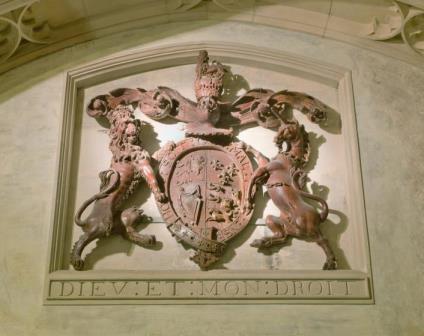 Supporters are animals, mythical beasts or sometimes human figures on either side of a shield ‘supporting’ it.  The carved wooden lion and unicorn seen here are to be found over the door between St George’s Chapel and the Dean’s Cloister.  The Royal Arms date from the reign of King George III. 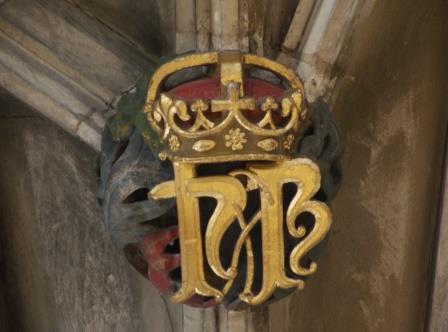 Cyphers are initials which are sometimes depicted with a crown.  Today EIIR, The Queen’s cypher, can be seen on a variety of items such as post boxes.  The initials HR (Henry Rex) or HK (Henry VIII and Katherine of Aragon) can be seen on some roof bosses in the Quire.

The White Rose which was the badge of the House of York can be seen at the bottom and top of the stained glass photograph. 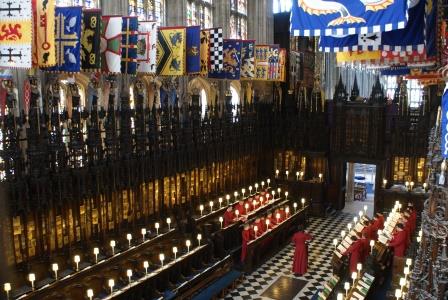 The livery colours of King Edward IV who began the building of the current St George’s Chapel in 1475 were murrey and blue.  These colours are still in use today; the Clergy, Virger and Choir of St George’s Chapel wear murrey cassocks whilst all sorts of objects from carpets to choir music folders are blue.  The Choir are seen in rehearsal in the Quire wearing their murrey cassocks but without white surplices which they add for Services.