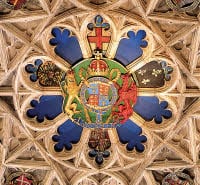 St George’s Chapel was begun in 1475 by King Edward IV and finished, just 53 years later in 1528, by King Henry VIII.  The central roof boss over the organ screen depicts Henry’s coat of arms and marks the buildings completion.  The Chapel is the burial place of both these Kings as well as eight other British sovereigns. A number of exhibitions and concerts are taking place in and around the Chapel to mark the 500th anniversary of Henry’s accession to the throne. 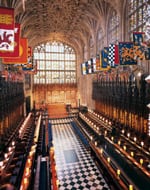 21 APRIL 2009
Evensong at 5.15pm – a service of Evensong or Evening Prayer is held every day of the year in St George’s but the music at this (accession date) service will be appropriate. The Magnificat will be sung to a setting by Nicholas Ludford (1485-1557), who was a Canon of the Royal Free Chapel of St Stephen’s, Westminster (a sister foundation of St George’s). The ‘Benedicta’ Magnificat is of particular interest as it is derived from a Mass also thought to be composed by Ludford, of the same name, and is also the only English Magnificat from this period incorporating an independent plainchant. The anthem will be ‘Dum transisset sabbatum’ (When the Sabbath was past), a respond for Eastertide, composed by the first Organist of the then new Cardinal College (now Christ Church) in Oxford, John Taverner, and is likely to have been first heard in the 1520s.  No tickets are required.

Music from Henry VIII’s reign will be featured during services during the Summer Term. Further details will appear in due course, and be indicated on the music list.

6 – 27 APRIL 2009
A four part documentary about King Henry VIII (Mondays on Channel 4) presented by David Starkey.  Some filming for the series was undertaken in St George’s Chapel. 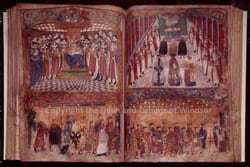 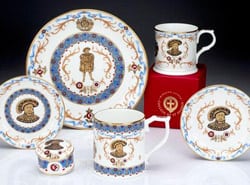 The designs of this exclusive to St George’s Chapel china are based on the stained glass of Henry in St George’s Chapel, his coat of arms (which forms the central boss in the Chapel vaulting) and designs from the wooden oriel window he had put into the Chapel for Katherine of Aragon. (Visit the Chapel Shop)

Monday 28th and Tuesday 29th September 7pm
Pass time with good company
With “Quintessential Voices” in the Quire of St George’s Chapel (around King Henry’s grave) and the Dungeon.
A programme of words and music tracing the life and court of Henry VIII.

Some items from St George’s School art exhibition (23 March – 4 April) will be on display in the Dungeon for these evenings.