The new CD, very positively reviewed (*) on BBC Radio 3’s new disc review, is ‘The Lamentations of Jeremiah’.  The CD includes the first ever recording of John Mundy’s Lamentations composition.  Mundy (c1555-1630) was an organist at St George’s in the early 16th century and this recording gives life to these wonderful sounds for the first time in 500 years.  (Visit Chapel Giftshop)

Prior to this recording the Director of Music and the full Choir of St George’s Chapel have released two other CDs in the last 18 months.  Tim Byram-Wigfield recorded ‘La Nativite du Seigneur’ and other organ works by Olivier Messiaen and the full choir, under the musical direction of Tim Byram-Wigfield with Roger Judd at the organ, recorded a CD of favourite anthems “O How Glorious”.  This CD also included a world premiere recording – that of Parratt’s “The Whirlwind”.  These and a number of other CDs are available from the Chapel shop (Giftshop).  For personal visitors to the shop there are a number of musical related  items in the Chapel shop such as cufflinks and keyrings 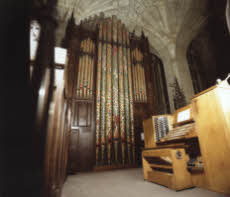 During the summer months there will be a series of organ recitals in the Chapel given by Tim Byram-Wigfield (Sunday 3 May), Ben Giddens (Sunday 7 June) and Organ Scholars (Sunday 28 June).  For ticketing information please see here.  The choir will perform at a concert in St George’s Chapel as part of the 40th Windsor Festival alongside the choir of King’s College, Cambridge (Visit Windsor Festival).  This joint event in the 500th accession anniversary year of King Henry VIII marks the fact that both buildings were finished during his reign.  To find out more about the choir of St George’s and the life of the Choristers at St George’s School find out more here (Sing at St George’s).

A collection of musical manuscripts is held by the Archives and Chapter Library of St George’s. For more information on access to holdings click here.

(*) “It is the first recording of Mundy’s Lamentations with the first bass part reconstructed by Jeremy Filsell and it’s from their recital of the Lamentations starting with the famous Tallis setting – by the halfway point of that I was hooked!

The mens’ voices blend well and it’s such a realistic presentation of the voices that it ends up pulling you into the heart of the performance. There’s a real sense of instinctive ensemble and natural phrasing. Apart from the Mundy, one of the highlights for me was Osbert Parsley’s setting of the Lamentations – comparatively brief, but when Byram-Wigfield slows the pulse of the performance by the Hebrew letters that punctuate the text, the effect as the harmonies unroll around us is magical.”