140th anniversary of the death of George, 5th King of Hanover 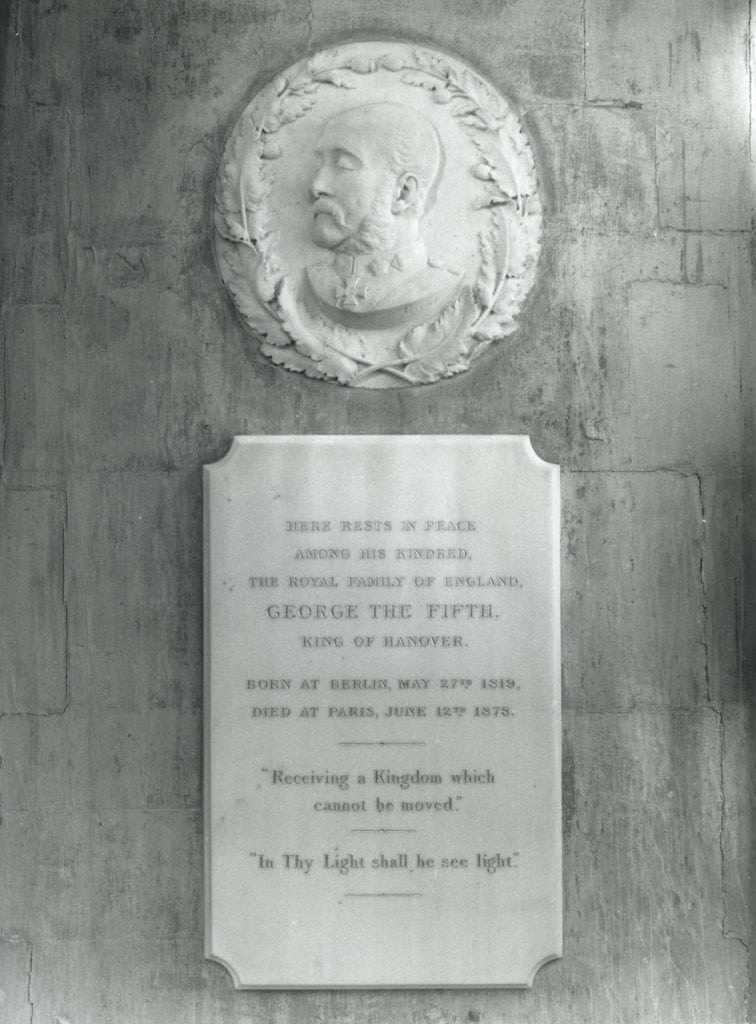 When William IV died in 1837 and was succeeded by his niece, as Queen Victoria, the crowns of the two kingdoms were divided. Descent in Hanover was according to ancient Salic Law, meaning that the crown could not be inherited by a woman. The crown of Hanover passed to William’s next living brother, Ernest Augustus, 1st Duke of Cumberland and Teviotdale, who lived in Berlin with his wife Princess Frederica of Mecklenburg-Strelitz. Queen Victoria removed the German arms, including those of Hanover, from the Royal Arms and returned to the arms of England, Scotland and Ireland as we see them today.

George, the only son of Ernest, Duke of Cumberland, was born 27 May 1819 in a hotel in Berlin and was baptised by the Reverend Henry T. Austen, brother of novelist Jane Austen. One of his godparents was the Prince Regent, George Prince of Wales. As the result of a childhood illness he lost the sight of one eye. Prince George of Cumberland spent time between Germany and England staying in the family home at Kew. In 1833 he suffered a tragic accident which eventually rendered him completely blind. His uncle, William IV, installed him into the Most Noble Order of the Garter in 1835.

In 1843 he married Princess Marie of Saxe-Altenburg the eldest daughter of Joseph, Duke of Saxe-Altenberg and Duchess Amelia of Wurttenberg. They had three children, one son, Ernest Augustus, Prince of Hanover born 1845, and two daughters. When the 4th King of Hanover, Ernest, 1st Duke of Cumberland, died in 1851 Crown Prince George of Hanover became the 5th King of Hanover, Duke of Brunswick-Luneburg, Duke of Cumberland and Teviotdale and Earl of Armagh.

The Marienburg Palace was built 1858-1867 as a summer seat for the House of Hanover in Germany and is still owned by Prince Ernest Augustus of Hanover. When the Prussian army occupied Hanover in 1866 George, 5th King of Hanover, and his son refused to renounce their claim to the throne of Hanover and were forced to live in exile in Gmunden, Austria, and Paris.

On 12 June 1878 George, 5th King of Hanover, died in Rue de Presbourg, Paris, and his body was brought to Windsor for burial. Queen Victoria, his first cousin, gave permission for him to be buried in the royal vault of St George’s Chapel on 24th June 1878, next to his grandfather George III, the first King of Hanover.[1] A monument to George hangs on the west wall of the Urswick Chantry chapel in the North Nave Aisle which bears the words:

Here rests in peace among his kindred, the Royal Family of England George V, King of Hanover born at Berlin May 27th 1819 died at Paris, June 12th 1878

Receiving a Kingdom which cannot be moved

In Thy Light shall he see light