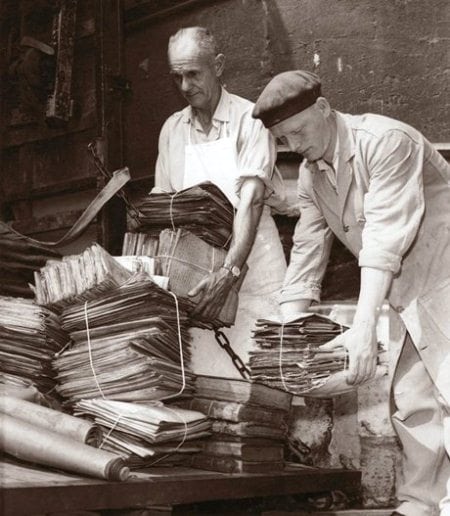 On 13 September 1867, the Ecclesiastical Commissioners for England removed in the region of four thousand documents from St George’s Chapel to their offices in central London. Almost a century later, on 23 July 1963, they were returned to their original home, delivered to the Custodian of the Muniments, Maurice Bond. This photograph records the unloading of the bundles, rolls and volumes from the van on arrival at Windsor.   The reason behind their sojourn in the capital requires an explanation.

In 1832, the Ecclesiastical Revenues Commission of Inquiry was established to investigate the extent and value of property belonging to the Church of England, including collegiate estates owned by cathedrals and royal peculiars. This was followed by the formation of an Ecclesiastical Commission for England and Wales in 1835, succeeded one year later by the Ecclesiastical Commissioners for England, appointed on a permanent basis under an Act of Parliament of 1836. Amongst other subjects investigated, the Commissioners considered the possible redistribution of church revenues, so that new churches and church schools could be established and maintained in the industrial towns which had sprung up in the early nineteenth century and in other areas ill-served by the Anglican Church.   Despite sustained opposition from the cathedral bodies and royal peculiars likely to be affected by such measures, an Order of Council was eventually passed, on 26 June 1867, obliging St George’s Chapel, Westminster Abbey and the cathedrals of England and Wales to surrender their landed property to the Commissioners in return for a contribution to their Fabric Funds (£26,000 in the case of St George’s Chapel) and a fixed annual sum (£14,600 pa for the Windsor Chapter).   Meanwhile, eight of the twelve Windsor Canonries had been suspended, as vacancies arose, under the Cathedrals Act of 1840, and the Minor Canonries at Windsor had been reduced from seven to four under an Order on Council in 1849.  The financial position and organisational structure of the College of St George, Windsor, the third wealthiest ecclesiastical foundation in the country, was permanently transformed. It must have been a bitter blow.

A practical consequence of the surrender of real estate in the days before central land registration was the need for the physical transfer of title deeds, surveys, manorial court records and other property records from the Dean and Canons to the new owners.   The tithes and landed property accumulated by the College of St George from its establishment in 1348 lay in over three hundred parishes and in thirty counties of England and Wales.  Records relating to this property, some of which dated back to the 12th century prior to its acquisition by St George’s, ran into the thousands, all carefully stored in the medieval Aerary. On 1 August 1867, the Chapter Clerk, Richard Cope, was ordered by Chapter to select and schedule the muniments dating from 1750 onwards which were to be transported to the Commissioners’ Offices in London. Six weeks later the move was accomplished, leaving behind in the Aerary only those property documents predating the agreed cut-off.

Changes in property legislation after the First World War, which brought an end to manorial jurisdiction and introduced compulsory land registration, made it unnecessary for the Commissioners to retain older documents of title for legal purposes. As an increasing percentage of church landed property was sold by the Ecclesiastical Commissioners and their successors, the Church Commissioners, the Commissioners grew eager to part with the now redundant documents inherited from the Cathedral Chapters and similar institutions. This lies behind their return to their former homes in the 1960s. The consignment returned to St George’s Chapel in 1963 differed in some respects from the collection removed in 1867. A number of deeds had passed to the new owners of properties sold by the Commissioners in the interim and were not among those returned, while several post- 1867 leases and papers generated or accumulated by the Commissioners during their management of the property were added to the St George’ s Archives.  The items returned, all marked with the numbers assigned to them by the Commissioners which remain in use today, are available for consultation (by appointment) in the Archives search room and are listed as part of the online catalogue of property records.  They include some exceptionally interesting maps and surveys as well as manorial records and muniments of title. Their return to St George’s Chapel in the 1960s remains a cause for celebration.