Adoration of the Magi, Beryl Dean 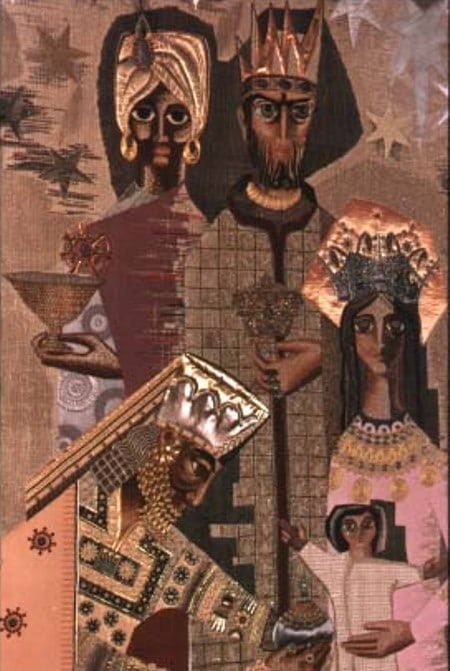 This tapestry is one of a set of five commissioned from Beryl Dean by the Dean and Canons of Windsor to hang in the Rutland Chantry. When she began the project in 1969, Miss Dean was initially given two years to carry it out but, hindered by her ill health, the ornate hangings took five years to complete. In 1974 they were first exhibited in St Andrew’s church in Holborn before being brought to St George’s Chapel.

Each tapestry depicts a scene from the New Testament and four of the five relate to the life of the Virgin Mary, a choice made because Miss Dean felt that there was greater scope for decorative work in women’s clothing than in men’s. In this one we see three Magi coming to kneel before Mary and the baby Jesus, offering worship and their gifts of gold, frankincense and myrrh.

The event as described in the Gospel of St Matthew tells how wise men – popularly known as the three Kings, or Magi – travelled to Jerusalem from the East, following a star in search of the child who had been born King of the Jews. They stopped first in the household of King Herod to enquire after the child before eventually journeying on to the town of Bethlehem. For this reason they arrived some time after the baby’s birth and are said to have made their visit to Jesus, Mary and Joseph in a house, although they are commonly shown as part of the group in the stable in Nativity scenes at Christmas time. The other four tapestries in the set show Mary’s Annunciation by the angel Gabriel; the Visitation, when Mary visited her cousin Elizabeth to share the news of her pregnancy; the first miracle performed by Jesus at the wedding in Canaa; and the temptation of Jesus in the wilderness.

Initially the tapestries hung in the Rutland Chantry, on the north side of St George’s Chapel, which contains the tomb of Anne Manners, a niece of two kings – Edward IV and Richard III – and her husband George, the 11th Lord Roos. However, in 2008 they were moved to a specially designed display cabinet in the Ambulatory, where one tapestry is shown at a time. This means that they receive significantly less exposure to the light and so are protected from the harmful effects it might have on their rich design and strong colours.

The works are fine displays of Beryl Dean’s bold style, belief in new designs and colour combinations and interest in experimenting with new fabrics. The ground is of woven linen and lurex and the pieces are hand embroidered in goldwork with drawn and filled work and appliqué in fabric and leather. Each tapestry is thought to have taken 1,490 hours’ work.1