The Ancient Society of College Youths 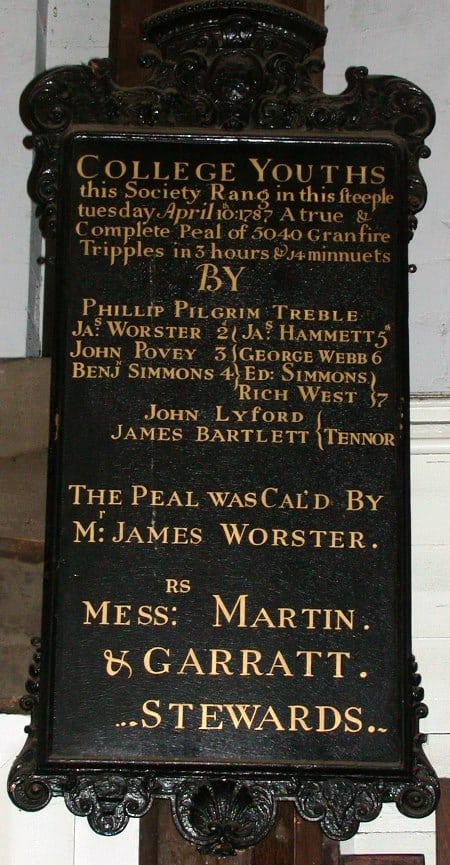 In the Curfew Tower (formerly known as the Clewer Tower or Julius Caesar Tower) there is a peal board erected to commemorate a visit by the Ancient Society of College Youths on 10 April 1787.

Grandsire is one of the standard change ringing methods, usually rung on an odd number of bells. The term ‘Gransire tripple’ (Grandsire Triple) used on the board indicates that seven bells were changing during the peal, whilst the eighth bell, the tenor, was ‘rung behind’ as the last bell in each change. The peal involved 5,040 different changes, the maximum number possible on seven bells.

The College Youths who visited the Curfew Tower were members of the Ancient Society of College Youths, a bell-ringing society founded in the City of London in 1637. It appears to have been originally based at St Martin Vintry and may have taken its name from College Hill (named after the college founded nearby by Dick Whittington in the fifteenth century).  It has had several different bases since, including St Martin in the Fields (from 1735), St Saviour Southwark (from 1849) and at St Paul’s Cathedral (from 1878), and is still in existence today as “ the premier change ringing society in the City of London, with a national and international membership that promotes excellence in ringing around the world” [www.ascy.org.uk]. Although based in the City of London, the Society has from its early days also recruited members from outside the capital. The Society maintains its own archives, which include membership books, peal books, minutes, and notes on the history of the Society, with microfilm copies of the majority of these records held by the London Metropolitan Archives, 40 Northampton Rd, London EC1R 0HB [CLC/001]

This peal board is one of several which adorn the walls of the ringing chamber in the Curfew Tower, the most recent peal board marking two peals commemorating the 90th birthday of The Duke of Edinburgh in 2011 and The Queen’s Diamond Jubilee in 2012.