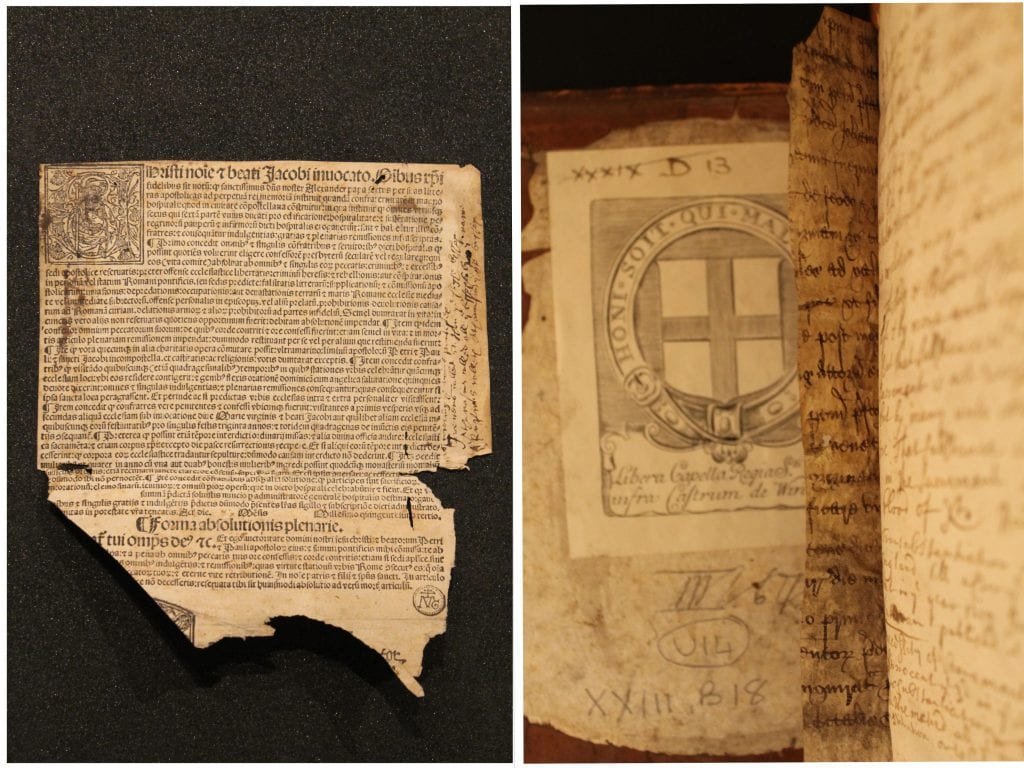 In honour of the upcoming World Book Day, the featured image this month is of two fragments used in the binding of a book held in St George’s Chapter Library: James Usher, Archbishop of Armagh ‘An answer to a challenge made by a Jesuit in Ireland‘, printed in London in 1625 [SGC RBK U.14]. A ‘fragment’ refers to part of a manuscript or printed work that that has been repurposed.

The fragment shown on the left was once used as a paste-down and end-leaf on the back board of Usher’s Answer to a challenge. The glue used to paste the paper down is dry but still visible on the back of the fragment and the board. Fortunately, when the fragment was removed from the book in 1937, care was taken to note its origin. This provides greater context not only for the fragment but also for how the book was used and the process by which it was bound. The fragment’s text is also almost entirely visible and was identified as a print copy of a Papal indulgence of Alexander VI (1492-1503), with form of absolution, granted to College of St George [now catalogued as SGC XVII.30.29].

A paste-down is part of a sheet glued to the inside cover of a hardback book, the second part of the sheet acting as a loose leaf (fly-leaf or end-leaf); together they are usually called the endpapers. They serve an aesthetic as well as practical function, counteracting the warp of the board as it dries. Print and manuscript fragments used as endpapers are commonly referred to as ‘binding waste’. Many can only be seen if a book’s condition has deteriorated or if it is dismembered for rebinding.

The second fragment, on the right side of the featured image, is still in-situ in the book. Unfortunately, very little can be gathered from the handwritten script visible on this fragment, making identification of its first purpose difficult.

Fragments are created when bookbinders re-use sheets from existing manuscript or printed works as waste material to support the binding of a new book. The initial purpose of the material – be it the sixth folio of a music manuscript, or the illustrated title page of a published book – is of little value to the binder who tears, cuts or folds it, creating a fragment for their own purpose.

Binding waste was created deliberately and by studying the book for which it was made, it is also possible to suggest some of the economic, socio-cultural and political motivations of bookbinders to recycle manuscripts and printed works. For example, parchment and paper were expensive to produce and so had great value as a recycled material. Manuscripts were favoured because parchment was a tough material ideal for binding supports. When the text of a manuscript or printed work came to be considered outdated it was a good candidate to be repurposed as binding waste. This happened to many Catholic theological works after the Reformation.

The binder of Usher’s Answer to a challenge made the choice to glue the ‘Indulgence’ fragment so that the text was still visible, and a study of both the book and the fragment can help to determine whether this was an aesthetic or content-motivated choice. It is possible that the second fragment could be removed and a greater understanding of its content gathered. However, not all binding waste can (or should) be removed from its book because fragments in situ are still capable of evidencing important and fascinating practices of re-use and recycling.

Though fragments may be the only piece evidence left of a lost book or document, they are unique because of a combination of their content and the process of their fragmentation. This makes them a singular witness to an event of human creation and destruction, however small.