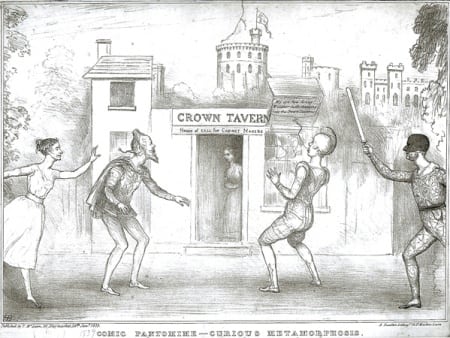 This lithograph by John Doyle, a popular political cartoonist, dates from the early years of Queen Victoria’s reign. Depicted as an inn keeper, the young queen welcomes four pantomime characters into her castle at Windsor, which has been renamed the “Crown Tavern”.  But what does the cartoon held in the St George’s Chapel Archives and Chapter Library signify?

The identity of the characters featured in the lithograph [SGC F.70] is revealed in a contemporary periodical: The Literary Gazette. In its edition for Saturday 2 February 1839, it describes the cartoon which had been published several days earlier, on 29 January 1839, as the fifth in a series produced under the initials ‘H.B.’, John Doyle’s cipher:

“Comic pantomime – curious metamorphosis” is one of the most ludicrous compositions of the series. The Queen at the door of Windsor Castle, changing, under Harlequin’s wand, into the Crown Tavern and House of Call for Cabinet Makers, is surrounded by Lord Melbourne as Harlequin, Lord J Russell as Columbine, Lord Palmerston as Pantaloon and Lord Morpeth as the Clown. The whole scene is most grotesque: and the characters executed with infinite drollery.

The “cabinet makers” in question were, of course, not furniture makers but key members of the contemporary Whig government: Lord Melbourne as Prime Minister; Lord John Russell as Secretary of State for Home Affairs; Lord Palmerston as Secretary of State for Foreign Affairs; and the Earl of Carlisle, Viscount Morpeth, as Chief Secretary for Ireland.  In the early days of her reign Victoria, who had ascended to the throne in 1837 at the age of eighteen, was heavily dependent on the advice and support of Lord Melbourne. An apartment was made available for him in Windsor Castle and he apparently spent many hours a day in her company. She expressed her fondness and admiration for him in her journal. Indeed, in 1837 a rumour apparently circulated that she was considering marriage with her Prime Minister. With a forty year age gap, the fifty-eight year old was viewed probably more as father figure by the young Queen, who had lost her own father at an early age, than a prospective husband. However, this did not prevent some contemporaries, including Thomas Barnes, editor of The Times, from objecting publicly in 1837 to the close relationship between them: “Is it for the Queen’s service – is it for the Queen’s dignity – is it becoming – is it commonly decent?”. Was the fact that Lord Melbourne frequently enjoyed Queen Victoria’s hospitality at Windsor Castle the reason for renaming it the “Crown Tavern” in Doyle’s cartoon?  A manuscript note on the back of the copy held by the British Cartoon Archive explains:  “Lord Melbourne & his crew make quite a tavern of the Palace, dining there every day & excluding anyone not of their own clique”.*

It should be added that John Doyle’s cartoons were generally designed to be amusing rather than acerbic, as the editor of The Literary Gazette was keen to point out: ‘The prolific humour of H.B. entitles him to our continual notice; not as party writing, but as chronicling good jokes at which we know the principal persons caricatured laugh as heartily as any of the public.’

* I am grateful to Dr Nicholas Hiley, Head of the British Cartoon Archive, for this information.