The coronation of Her Majesty Queen Elizabeth II in June 1953 involved a lot of preparation for St George’s Chapel, despite the fact that it would take place in Westminster Abbey. 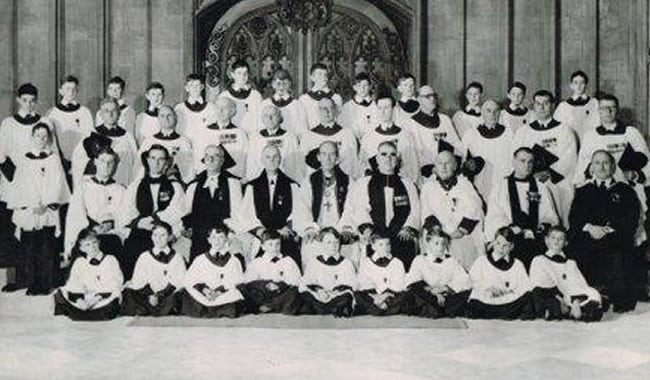 The lay clerks and choristers were to form part of a nearly 400-strong choir, made up of members of the choirs of Westminster Abbey; the Chapels Royal of St James’ Palace, Hampton Court and the Tower of London; St George’s Chapel; St Paul’s Cathedral; the Queen’s Chapel of the Savoy; and members of 15 other cathedral and church choirs including those from St Patrick’s Cathedral, Dublin, and St Mary’s Cathedral, Edinburgh. Still more came from the dominions.

Individual rehearsals began in earnest, and were so frequent that in a Chapter meeting held in March “It was agreed that the Precentor should arrange with Dr Harris for choristers to be excused if necessary on certain Wednesdays when Evensong is sung in order that they may take part in school cricket matches in view of the extra rehearsals required for the Coronation service.”

By May, it was time for every choir to practice together. A full choir rehearsal was to take place on the 26th May, with the Earl Marshal’s rehearsals on the 27th and 29th May. Full instructions were issued to the members of the choir, regarding timings, places in the Abbey, and more practically the careful naming of robes to ensure there’d be no mix-up on the day. For the day itself, the choir were advised that if they were to take refreshments with them, they should consist of no more than can be carried in the cassock pocket, with the specific notes suggesting “Sandwiches made with fresh vegetables as well as meat or eggs are recommended, also stoned raisins and perhaps a small bottle of milk. It is advised that no tea or coffee be taken on the morning of the Coronation.”

22 choristers and 10 lay clerks from St George’s Chapel, together with the organists William Henry Harris and Lionel Dakers, and the Minor Canons Christopher Hare and W.A. Pike, performed at what would surely be one of the greatest occasions of their careers. Each would receive a Coronation medal, along with other members of the College, as a memento of the event, and as a further commemoration, the choristers chose to put their expenses towards a new garden-seat for the playing fields.

A further part was played by the Dean, Bishop Eric Hamilton, who walked in the procession in his office as Register of the Order of the Garter, wearing his officer’s robes and carrying the Register before him.

The event was celebrated at Windsor with a broadcast service of matins and Eucharist. The Dean chose as the Prayer:

“We are also come together to pray for our Queen, that both now, at her anointing and coronation, and always, in her ministry among us, God may endue her richly with all wisdom and grace; and for ourselves and all her peoples, that we may be enabled to do all that our true service to God and to our Sovereign doth require.”

The Coronation of Charles II 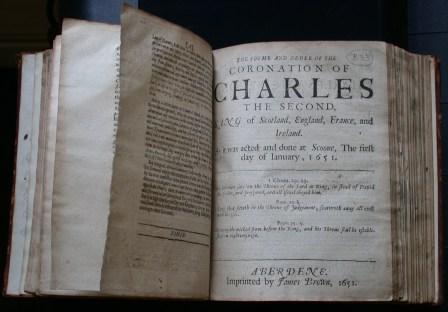 Scone had been the resting place of the Stone of Destiny, which legend said was the stone used at the crowning of Fergus Mór, the founder of Scotland. It was used for centuries in the Coronation ceremony, until 1296, when Edward I took the Stone from the Palace as spoils of war. It was taken to Westminster Abbey where it was set into a wooden chair on which future Kings of England would be crowned. Although crowned King of Scotland in 1651, it was not until 1660 that Charles II would sit on the Stone of Destiny, but this time he would be crowned King of England.

It is interesting to read in the tract that Charles swore his oath with the words  “I Charles, King of Great Britain, France and Ireland…”, creating a union between Scotland and England decades before the formal union under Anne in 1707.