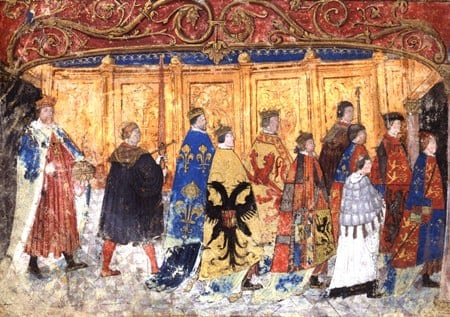 Henry Fitzroy, the illegitimate son of Henry VIII by his mistress, Elizabeth Blount, was born in 1519. Elizabeth, the daughter of Sir John Blount, had come to the King’s notice as a lady-in-waiting to his first wife, Katherine of Aragon. In the absence of a legitimate son, the King showed much favour to Fitzroy, who shared his father’s red hair and youthful good looks. On 25 June 1525, at the age of only six, he was installed as a Knight of the Garter. In this illustration from the Black Book of the Garter dating from about 1534 [SGC G.1], Fitzroy can be seen to the far right of the picture taking part in a Garter procession while his father, as the head of the chivalric Order of the Garter, brings up the rear. The illustrator, believed to be the court painter Lucas Horenbout, has taken the liberty of painting the Knights of the Garter in multi-coloured cloaks bearing their heraldic coats of arms or badges rather than the plain blue mantles of the Order, presumably to facilitate identification.  Fitzroy’s cloak bears his own coat of arms, incorporating the royal lions and fleurs-de-lis.  His red hair is clearly visible beneath his red and gold cap. An informal portrait of Fitzroy in miniature at the age of 15, believed to be painted by the same artist at about the same time (1533 or 1534), is held in the Royal Collection

In 1525, the same year that he was installed as a Knight of the Garter, Henry Fitzroy was created Duke of Richmond and Duke of Somerset, and appointed to high office, as Lord High Admiral and President of the Council of the North. Further honours were to follow, including the Lord Lieutenancy of Ireland in 1529, and on 28 November 1533 he was married to Mary Howard, daughter of the third Duke of Norfolk and sister of the Earl of Surrey. It seems that Henry VIII regarded him as an appropriate representative in affairs of state, despite his young age, and was even contemplating making Henry Fitzroy his heir after Anne Boleyn failed to bear a living son. Fitzroy’s premature death in 1536 at the age of seventeen, probably from tuberculosis, left Henry VIII distraught. However, to his great joy, he was to father a legitimate son and heir, Edward, the following year by his third wife, Jane Seymour. Meanwhile, Fitzroy’s body, having been interred at Thetford Priory, the principal burial place of the Howard family into which he had married, was transferred to St Michael’s Church, Framlingham, Suffolk, after the dissolution of the Priory. His tomb chest can still be seen in Framlingham, with the lower heraldic panels recording his royal lineage and the upper panels decorated with scenes from the Old Testament: an unusually grand memorial to an illegitimate son.