The engraved portrait featured this month depicts John Robinson, Dean of Windsor between 1709 and 1714, which hangs in the deanery. During his time as Dean, Robinson remodelled the Deanery, creating a new façade and front door. Robinson’s coat of arms was then fixed above that front door and features a curious inscription. 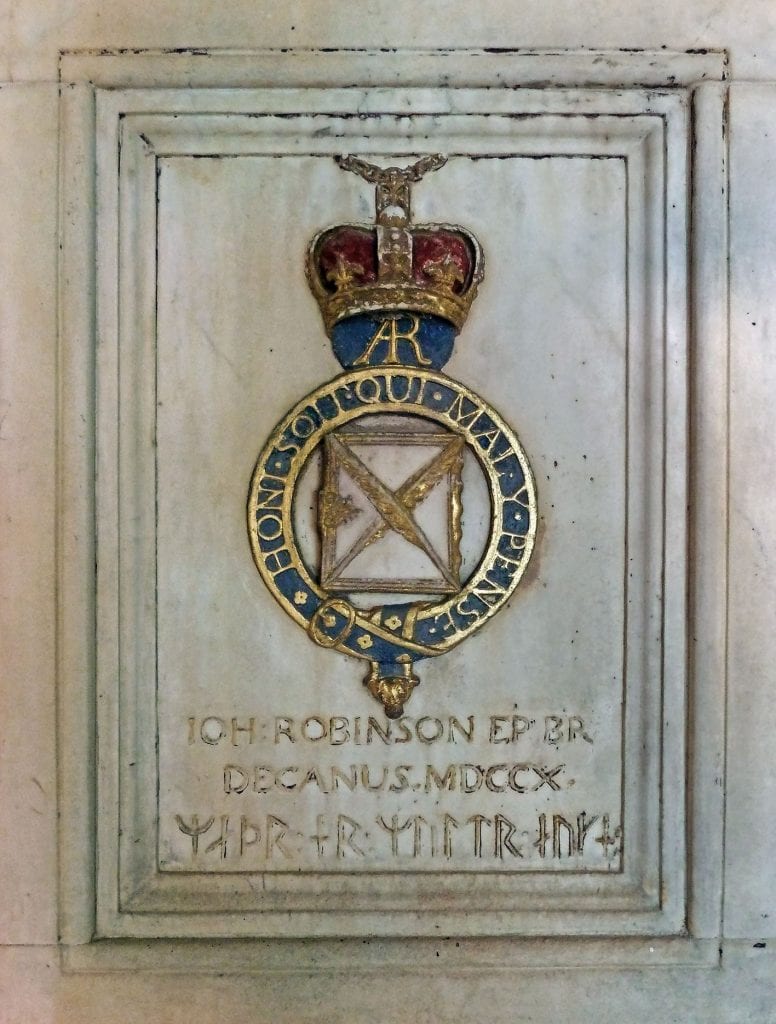 The inscription below his arms is in Latinised futhark, a runic alphabet employed mainly in Scandinavia. In Old Norse it can be transcribed as ‘Mađr er moldur auki’ and is a fragment of a twelfth century Norwegian runic poem. It was used by Robinson as a personal motto. In Latin the inscription has been translated as ‘Homo pulveris augmentum’ and in English ‘man augments the earth’ or ‘man is an augmentation of the dust’. It is also associated with a passage from Psalm 103:115: ‘As for man, his days are like grass…’ but you can see its context in the full twelfth century poem if you follow this link.

Though this may seem a peculiar choice, an understanding of Robinson’s career illuminates how he came to choose an obscure runic poem for a motto.

During his lifetime Robinson was consecrated bishop of Bristol and later London, but he is now best remembered for his role as a political agent in Sweden. He resided for over thirty years in Stockholm and was fluent in Swedish. His skill as a diplomat assisted England in maintaining a good relationship with Sweden during a tumultuous political period in Europe.

Robinson was born in Yorkshire and attended Brasenose College at Oxford before he was elected a fellow of Oriel College in 1675. He first moved to Sweden in 1677 when he requested a leave of absence to accompany his sister Clara and her husband Sir Edward Wood, then the Swedish envoy. On this first appointment he was the legation secretary for the British embassy in Stockholm but he also served as chaplain in secret as Anglican services were illegal in Sweden. Robinson became an official diplomatic agent in 1683.

It was during this initial period of residence in Sweden that he appears to have taken an interest in runes. Mainly associated with the Viking Age, they were a source of academic interest by the Renaissance and were used decoratively. Notably before departing Sweden for the first time in 1687, Robinson requested permission from King Charles XI to take two rune stones with him, which were later presented to the Ashmolean Museum.

Robinson spent almost two further decades living in Sweden and only returned to England in 1709, when he was soon after installed as Dean of Windsor on 3 December 1709. In 1710 he was also consecrated as bishop of Bristol and appointed lord privy seal in 1711. However his greatest achievement was the negotiation of a peace treaty at Utrecht in 1713. The treaty he negotiated recognised Queen Anne as the British sovereign, withdrawing European support for her Catholic half-brother, the son of King James II.

Following his appointment in Windsor Robinson made a donation to the St George’s Chapter Library, as was customary for new members at that time. The series of volumes by Joannes Hevelius, a famed astronomer, bear inscriptions of his name and titles.

In March 1714, Robinson was translated to the see of London, at which point he gave up the Deanery of Windsor. John Robinson died on 11 April 1723 at Hampstead and was buried in the churchyard at Fulham.