Ladies of the Garter 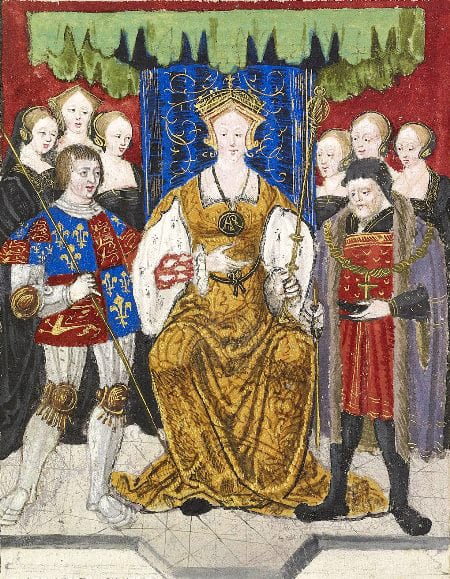 When Edward III founded the Order of the Garter in 1348 or thereabouts, he confined membership of the exclusive chivalric fraternity to twenty-six – the King and twenty-five loyal Knights who had distinguished themselves in battle.  Despite the exclusively male nature of the Order, it seems that Edward III envisaged that women should be associated with it from its early days, playing a part in its celebrations. The ladies in question would perform a dual role on these occasions, as objects of veneration, to inspire the Knights, and as active participants in the feast. After all, how better could a Knight demonstrate his chivalric prowess than in demonstrating it before a carefully selected female audience?

These ‘Ladies of the Garter’, who were generally members of the royal family or closely associated with the Order by ties of marriage or kinship, were issued with robes and hoods for the annual feast of St George, which was generally held at Windsor Castle, the spiritual home of the Order. To judge from their cost, the robes delivered to the favoured ladies and paid for by warrant of the Crown were no less grand than those issued annually to the Knights. In 1358, the account of John de Buckingham, Keeper of the King’s Wardrobe, records a payment of £500 to Queen Philippa for her apparel for the forthcoming feast, whilst Edward III’s daughter, Isabella, Countess of Bedford, was issued with a robe and hood of ‘sanguine in grain’, the same colour as those issued to the Knights, by royal warrant of 8 April 1376.  But were the Ladies of the Garter entitled to wear the Garter itself?

Three fifteenth century effigies of Ladies of the Garter suggest that they were. When Alice Chaucer, Duchess of Suffolk, was buried in the parish church of Ewelme, Oxfordshire, she was depicted on her tomb wearing the Garter on her left arm just above her wrist, whilst the effigy of Margaret Byron, wife of Sir Robert Harcourt K.G., in the church of Stanton-Harcourt, Oxfordshire, showed the Garter just above her left elbow.  A third tomb figure, now lost, that of Joan, Countess of Tancarville, wife of Sir John Grey K.G, also bore the Garter on her left arm according to antiquarian accounts.  If permitted to wear the Garter symbolically in death, it is likely they were entitled to do so in life.

In contrast to the Knights, there appear to have been no regulatory statutes for the Ladies of the Garter and no fixed number was imposed. We only have evidence for two in the reign of Edward III (1327-77), Queen Philippa and Edward’ daughter, Isabella, but it is likely there were more. Many names of Ladies of the Garter survive from reign of Richard II, who was a keen advocate of chivalric values. In the course of his reign, he granted Garter robes to at least thirty-six ladies, including several who were not members of the royal family nor related to Knight Companions. Maud, Countess of Oxford, and Blanche, Lady Poynings, for example, seem to have owed their selection as Ladies of the Garter in 1385 to royal favour alone. Richard’s successors varied in the level of support for the Order and its female associates. Henry IV and Edward IV were the most active in their appointment of Ladies of the Garter, whilst Henry V and Henry VI showed little interest in doing do. The first of the Tudor Kings, Henry VII, was the last to act as patron to these Ladies, honouring his mother and two of his daughters with Garter robes.

Sadly, the award of the status of Lady of the Garter lapsed under Henry VII’s successors, and was not to be revived until the early twentieth century. In 1901, Edward VII conferred the honour on his wife, Queen Alexandra, who was allocated her own stall and banner in St George’s Chapel, and George V and George VI followed suit. Other royal ladies selected as honorary associate (or supernumerary) members of the Order include Queen Wilhemia of the Netherlands in 1944 and Queen Margarethe of Denmark in 1979. However, it was only in 1987, by Garter Statute of the present Queen, that women became eligible for admission as full ‘Lady Companions of the Order’, the female equivalent of the Knights of the Garter, forming part of the body of the twenty-six. The first lady to be awarded this honour was Lavinia, Duchess of Norfolk, in 1990.