The Martyrdom of St Stephen 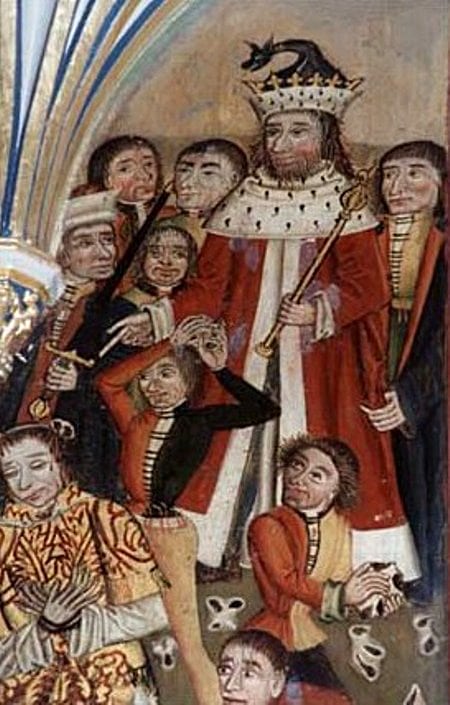 The Hastings Chantry Chapel, built within St George’s Chapel on the north side of the Quire behind the stalls, contains four paintings depicting scenes from the life and death of St Stephen.

Each painting is about four feet in height, and their backs fit into the Quire stalls, possibly suggesting that they were painted in situ. There are no extant records for the payment of artists or painters for the works, meaning that the origin and dating of these paintings can only be conjectured. The costumes worn by the characters, in particular a headdress worn by a woman in the first scene, suggest that the paintings were designed in the late fifteenth century, and the style suggests the work of an English screen painter. Interestingly, the paintings in the Oxenbridge Chantry Chapel, built only a few years after the Hastings Chantry Chapel, are of a much higher standard and show certain continental, particularly Dutch, influences which are absent from the Hastings paintings. 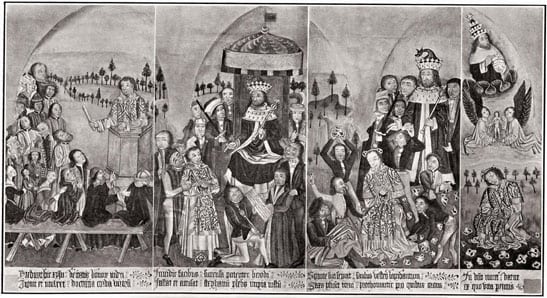 The scenes, taken from the story of St Stephen’s martyrdom in the Book of Acts, depict Stephen preaching to a crowd, being brought before King Herod (curiously not the High Priest and Council), being put to death by stoning, and ascending into Heaven where his soul is received by God wearing three crowns. Even though the pictures are accompanied by explanatory texts, the scenes have been arranged in such a way that the piece could also have worked as a means of instruction for illiterate visitors to St George’s Chapel. Facial expressions and bodily positions are exaggerated, particularly in the third scene, and the incidental background features and brightly coloured costumes iterate to the ignorant that the four paintings form part of a unified moral story.

William Lord Hastings was beheaded in 1483 by order of Richard, Duke of Gloucester, later King Richard III, in what was the first summary beheading to take place in the Tower of London. It has been suggested that the subject matter of the paintings was chosen in order to draw parallels between the martyr St Stephen and the benefactor Hastings following his premature death. Janet Backhouse has suggested that the choice of Herod, ‘that pattern of all evil kings and slaughterer of the innocent’, rather than the High Priest, is evidence of the pointed message of the paintings. Given the nature of these paintings, they must have been ordered after the overthrow Richard III by Henry Tudor in 1485. In the years following the death of William Lord Hastings, the paintings and the Chantry Chapel itself will have acted as a powerful symbol of the status of the Hastings family.

Almost twenty years after the death of Lord Hastings, his will was executed. It provided for a chantry priest, who would be instructed to sing masses and say prayers for William Lord Hastings and for the souls of all Christians on a regular basis. St George’s Chapel Archives holds a deed of appointment of trustees for the foundation of the Hastings Chantry, dated 30 November 1499 and signed by Edward Hastings, son of William (SGC XV.58.C.14). The chantries in St George’s Chapel were exempt from the 1547 Act of Henry VIII’s government which dissolved the majority of English chantries, and the St George’s Chapel Archive holds evidence which suggests that a number of these chantries continued to operate throughout the sixteenth century and into the early years of the seventeenth century. However, by 1614 all payments to chantry priests had ceased (SGC XV.59.31). A Chapter minute dated 28 September 1614 shows that Edmund Casse, the last of the chantry priests, appealed unsuccessfully for his ‘Chantry pay’ and that ‘the Chapter held his place void and would stand upon their right’ (SGC VI.B.2).