The missing will of Canon Oxenbridge 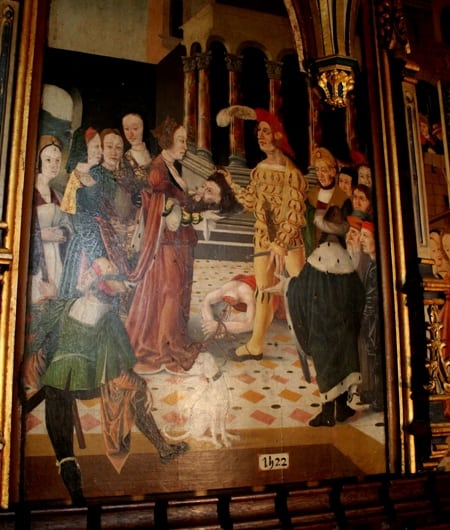 Within St George’s Chapel, Windsor, are several chantry chapels. These side-chapels, accessed from the nave, the quire aisles and the crossing, were established in the 15th and early 16th centuries by individuals and families who wished to ensure that prayers would be said and masses would be celebrated for their souls after death.  The founders of these chantries endowed the Dean and Canons with lands or other property to produce an income specifically reserved for the construction and maintenance of the chapels and the employment of one or more chantry priests to take prayers and celebrate masses.  One of the Windsor chantry founders was John Oxenbridge, a member of a leading Sussex family, who was a Canon of Windsor from 1509 to 1522. The small caged chantry chapel which bears his name may be found in the south quire aisle. The chapel is dedicated to St John the Baptist whose story is narrated in the beautiful murals which decorate its north wall, painted in 1522.   Over the door is a rebus of the founder’s name – an ox, the letter ‘N’ and a bridge with water under it – carved in stone.

On 16 May 1522 Canon Oxenbridge granted lands in Bray, Cookham, Old Windsor, Clewer, Dedworth and Winkfield to Canons James Denton and Geoffrey Wren and to William Duffield, ‘for carrying out his last will’ (SGC XV.58.E24).  He died only two months later, on 25 July. In an article on John Oxenbridge in the Annual Report of the Friends of St George’s Chapeland the Descendants of the Knights of the Garter for 1941 Dr Ollard regretted the fact that the Canon’s will had not survived. The will appears to have been ‘mislaid’ as early as 1587, when Robert Oxenbridge, a relative of Canon Oxenbridge, attempted to acquire lands which he claimed had been left to him but which the Dean and Canons withheld from him. Robert asserted that the then Dean of Windsor, Dr Day, was concealing the will from him intentionally. However, Dr Day replied that neither the will nor a copy of it could be found in the Chapter’s records.  In the 1940s, Dr Ollard wrote: ‘The loss of Dr Oxenbridge’s will is still a loss, for evidently in it are recorded the rules he made for his chantry’. Dr Ollard concluded that it was unlikely that the will would ever be found, adding ‘I strongly suspect that Dean Day and his merry men burnt it’.  Dean Day was indeed accused during his life-time of numerous underhand property dealings.

The loss of Oxenbridge’s original will would not have been so unfortunate if a registered copy could be located. If it had been proved in the Prerogative Court of Canterbury or in one of the other major ecclesiastical probate courts with surviving probate registers, the content would still be available to us. However Ollard failed to find a registered copy of Oxenbridge’s will.  The trail went cold until Dr Ian Doyle, formerly Head of Special Collections at Durham University Library, made an interesting discovery in the binding of a sixteenth century book, A Repliie unto Mr Hardinge’s Answere,published in 1565. The end-leaves used by the binder comprised pages taken from a dismantled (unidentified) will register, which included the last three pages of Oxenbridge’s registered will. In 2016 Dr Doyle kindly alerted us to this discovery and donated a photocopy of the pages to the St George’s Chapel Archives (SGC M.1284). In the text of this surviving portion of the will, the testator instructed his trustees to provide from his lands and tenements in Wraysbury and Old Windsor for William ‘Oxenbrigge’ and, in the event of his decease, for the first child (as yet unborn) of Margaret Hothorn, and in default to Robert ‘Oxenbrigge’ and his heirs.  He left further instructions concerning his gift of lands to the Dean and Canons of Windsor to maintain his chantry, perform his obit and employ a chantry priest at a salary of £9 per year (45 shillings per quarter). Unfortunately, the earlier pages of the will, which might have provided more detailed information about the foundation, endowment and terms of the chantry, were not included by the binder. Perhaps they form the end-leaves of some other unidentified volume?  Nevertheless, I am certain that Dr Ollard would have been pleased to know that the text of part of the will would come to light, although sadly it does not answer the question which he posed in his article: ‘Why was Dr Oxenbridge’s chantry dedicated in memory of the Beheading of St John?’.