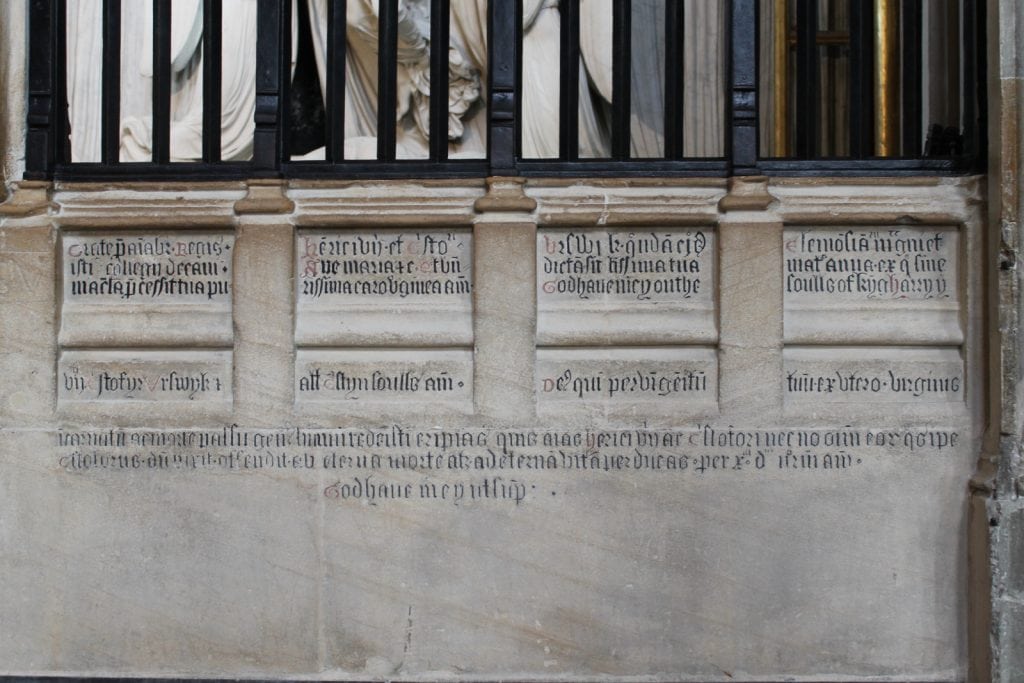 In about 1507, a recently completed side-chapel at the north-west end of the Nave was chosen as a chantry chapel for Dean Christopher Urswick. A magnificent stone screen was erected to separate the chapel from the North Nave Aisle with an inscription which, amongst other requests, seeks prayers for those whom Dean Urswick may have offended in his lifetime.

Christopher Urswick (c.1448 – 1522), had served as chaplain and confessor to Margaret Beaufort and subsequently to her son, Henry Tudor, when in exile abroad. Urswick was involved, with Sir Reginald Bray, in negotiating Henry’s future marriage with Elizabeth of York and in assisting in his campaign for the English throne. On his accession as Henry VII, the King rewarded Urswick for his loyal support. Within a month he had been appointed a Canon at St Stephen’s, Westminster, and as the King’s Almoner, an influential office later held by Cardinal Wolsey. These appointments were closely followed by other positions, including the Wardenship of King’s Hall, Cambridge (1485), a Canonry in St Paul’s Cathedral (1487) and the Deanery of York in 1488. A skilful diplomat, he was regularly sent on missions abroad by Henry VII.

Urswick was appointed Canon of Windsor and Register of the Order of the Garter in 1492 and was promoted as Dean of Windsor in 1496. His other church preferments are too numerous to mention; it was fortunate that, as King’s Almoner, he was excused from residence in most of them. However he did choose to reside at Windsor, where he made major alterations to the Deanery and added a whole new west-range, which bears his name. He also paid for the repair of the choristers’ house and spearheaded the completion of St George’s Chapel, begun by Edward IV in 1475. By the time of his death in 1522, only the crossing remained to be vaulted: a final feature installed six years later, in 1528.

A man of great intellect, Christopher Urswick enjoyed the companionship of Sir Thomas More, and his protégé Cuthbert Tunstall, and became a friend of the famous scholar Erasmus. In 1502 he was inducted as rector of Hackney, then in largely rural Middlesex, where he increasingly chose to reside. In 1505, he resigned as Dean of Windsor in order to pursue his scholarly interests there. An energetic, able and yet modest man, he must have been much missed in Windsor. In 1507, two years after his retirement, the Dean and Canons of Windsor decreed that the choristers were to pray daily for the soul of Dean Urswick within his chantry chapel and in the choristers’ house which had been repaired at his expense. So faithfully was this decree followed that the choristers continued to begin the day with a prayer for Dean Urswick until weekday sung-Mattins was replaced by a spoken service in 1975.

The sixteenth century inscription on the screen outside the Urswick chantry chapel, continues to seek prayers for the souls of Christopher Urswick and his master, Henry VII and, interestingly, for all other Christian souls, particularly those whom ‘the said Christopher offended during his life’. Although the screen was removed to the South Quire Aisle in 1824, when a monument to Princess Charlotte was inserted in the chapel, it was restored to its original position by Harold Brakspear in the 20th century. Written partly in abbreviated Latin and partly in English it reads (when the abbreviations are expanded):

Christopher Urswick died in Hackney on 24 March 1522, at the impressive age of 74, and was buried in the parish church there, which as rector he had helped to rebuild. Two memorial brasses were placed above his grave: one being his effigy in canonical dress; and one his epitaph, which included the words:
Through all his days he spurned great honours. Content with a simple life he preferred to live and die. He departed full of years, lamented by all. Even in his will he forbade funeral pomp. Here buried, he awaits the resurrection of the flesh at the coming of Christ