Royal Arms of Philip and Mary 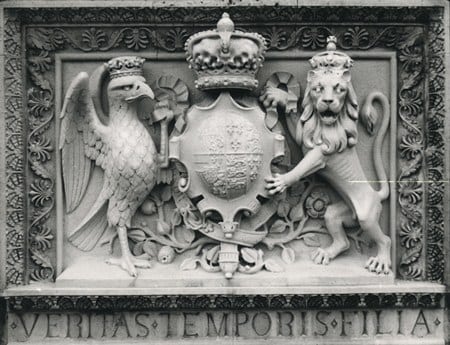 On the front of Mary Tudor Tower, the Governor of the Military Knights’ house in the Lower Ward of Windsor Castle, can be seen a carved panel displaying the arms of Philip II and Mary I. Such representations are rare since the royal marriage lasted only four and a half years, from July 1554 until Mary’s death in November 1558. When the carved panel was described by heraldic artist Thomas Willement in his book, Royal Heraldry, published in 1821, it appears to have been in a poor state of repair:

‘On a tower of Windsor Castle, appropriate to the Governor of the Poor Knights of St George, is a stone compartment, surrounded by ornamental mouldings: within which have been sculptured the arms of Philip and Mary, impaled, within the garter and crowned; supported on the dexter side by an eagle, with wings endorsed; and on the sinister by a lion. Under the eagle is a slip of pomegranates, and under the lion a rose branch. The whole of the achievement is so much defaced that there remain but mere indications of the heraldic ornaments; the supporters are entirely destroyed, the outline only being discernible. At the top of the compartment appears to have been written Philip’s motto, “Colit Ardua Virtus’ and at the bottom, “Veritas Temporis Filia”, which latter sentence was used by Mary on her great seal previous to her marriage.’

The panel, which according to the historian Elias Ashmole had been originally carved by Henry Carrant in 1558, has been renewed more than once since Willement described it in the early 19th century.  Following the outline of the original, the coat of arms has been resculpted, displaying the Hapsburg arms of Philip II on one side (dexter) of the shield side-by-side (impaled) with the royal arms of Mary as Queen of England on the other side (sinister), with the eagle and pomegranates representing Spain and the lion and rose branch symbolising England.  Mary’s motto, carved at the bottom of the panel, means ‘Truth, the daughter of Time’.

In 1952 our present Queen authorised the renaming of the Governor of the Military Knights’ house as Mary Tudor Tower; this photograph of the arms appearing in the Annual Report of The Society of Friends of St George’s and the Descendants of the Knights of the Garter for 1952 to mark the occasion.  Originally constructed by Edward III in 1360 to act as a bell tower for St George’s Chapel, it was converted into a residence for the Governor of the Poor Knights under Mary I. For many years it was known as Governor’s Tower, but this caused confusion because its name implied that it was inhabited by the Governor of the Castle (a separate office), whose residence was elsewhere in the Castle. For sixty years it has been known as Mary Tudor Tower after the Tudor Queen who refashioned it in the 16th century. It will shortly to be occupied by the new Governor of the Military Knights, Lieutenant General Peter Pearson, who takes up his appointment on 1 August.