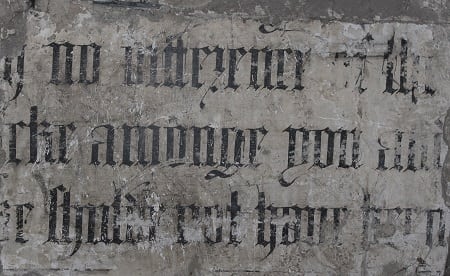 The Schorn Tower, which rises above the south-east corner of St George’s Chapel, Windsor Castle, contains a spiral staircase leading to two tower rooms currently used for storage. On climbing the stairs one passes a niche on the right, formerly an entry to a passage now blocked with reused masonry. One of the reused stones displays an inscription, featured as July’s image of the month.  The surviving text, written in English, is relatively clear. But what is the inscription and why is it there?

The text on the stone reads:

h no difference of the

e shulde not have been

After some research, this has been identified as part of a biblical quotation from 1 Corinthians 11: 29-31. In this passage, St Paul in his letter to the Christians in Corinth, emphasises the need for faithful participation in Holy Communion, including the necessity of communicants recognising the presence of Christ in the consecrated bread and wine.

In the King James Version of the Bible, first published in 1611, the verses appear thus:

29. For he that eateth and drinketh unworthily, eateth and drinketh damnation to himself, not discerning the Lord’s body. 30. For this cause many are weak and sickly among you, and many sleep. 31. For if we would judge ourselves, we should not be judged.

However, in the Schorn Tower inscription the words ‘no difference of’ appear instead ‘not discerning’ [the Lord’s body]. We must go back to Tyndale’s translation of the New Testament, published in 1526, to find the specific words that appear on the Schorn tower inscription:

Two later 16th century English versions of the Bible also contain the words ‘no difference of’ in this passage: the Great Bible of 1535 and the Bishop’s Bible of 1568. However, the last line of the inscription gives a further clue to the translation used on the stone. It is only in Tyndale’s version that the judgment mentioned is in the past tense as on the inscription – [w]e shulde not have been [judged]. This suggests a possible date of between 1526 and 1535 for the inscription if the Tyndale translation was in current use. Interestingly, at this period, Henry VIII had not authorised the use of the English Bible in the English Church. When he did, in 1535, it was Coverdale’s ‘Great Bible’ which was the version chosen.

A further question – where was the stone originally located – is more difficult to answer. Presumably it had been removed from the interior of St George’s Chapel or one of its chantry chapels at some (now unknown) date, and was stored somewhere in the college precincts until it was reused to block a passage in the Schorn Tower. Since the inscription relates to the conduct of Holy Communion, might it have been located on the walls of the side chapel in which the reserved sacrament was generally kept? Additional questions arise from its present location. What was the original use of the passage in the Schorn Tower and when and why was it blocked? Could it have led to a spy hole overlooking the high altar? There are two other spy holes in the Schorn Tower – one directed at the former Schorn Chapel (since renamed the Lincoln Chapel) which housed the bones of the saintly Master John Schorn and one over the South Quire Aisle where the tomb of Henry VI is located – inserted in the stonework most likely to enable an eye to be kept on tourists visiting the Chapel’s principal shrines. Until further evidence comes to light, all this will remain an intriguing mystery.