Signed and sealed by Henry VIII 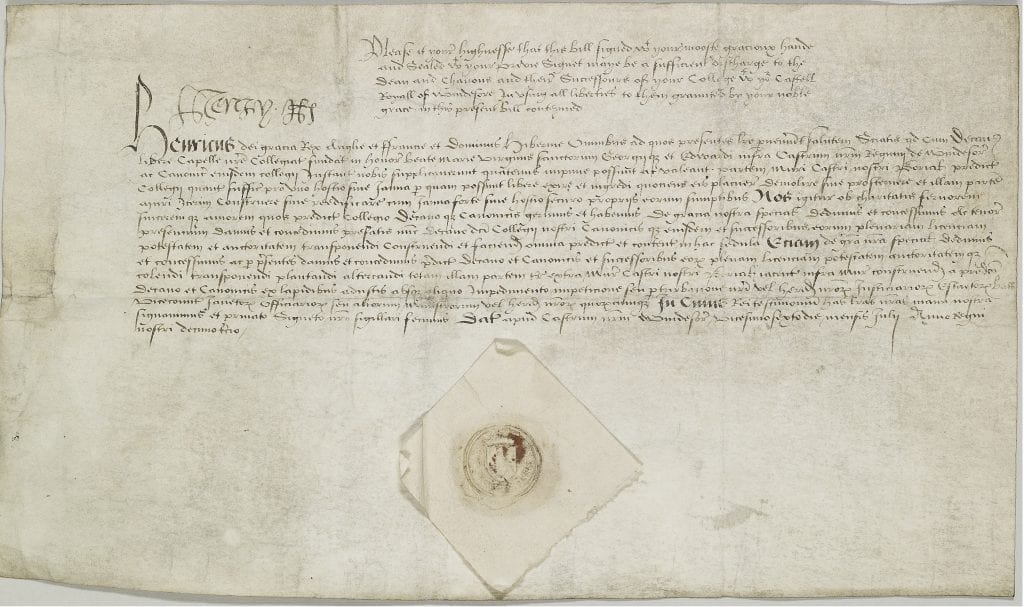 By this document, dated 26 July 1521, Henry VIII granted licence for a door or gateway to be made in the North Wall of Windsor Castle [SGC X.3.4]. Unusually, the document is authenticated by the King’s signature as well as a seal.

Seals were the most commonly used method to close and prove a document, but the penultimate line of the Latin text and the English annotation at the top of this document confirm that it was signed by Henry VIII’s own hand:

Please it your highnesse that the bill signed by your mooste gracious hande and sealed by your privie signet maye be a sufficient discharge to the dean and chanons and their successours of your College within your Castell Royall of Windesore in using all libirties to them granted by your noble grace in the present bill contained.

The document grants the Dean and Canons and their successors permission to build a strong, secure door by which they were allowed to enter and leave the Castle free of any restrictions. This provided better access to the land just below the north wall, later called the Dean’s Orchard or Chapter Garden. That is the area presently occupied by the grounds of St George’s School. Henry VIII also granted the Dean and Canons: auctoritatem que colendi transponendi plantandi alterandi totam illam partum terram extra mur castri nostri Boriali… [… the authority to cultivate, set over, plant and alter all of the land outside the north wall of our castle.]

In 1607 John Norden created a bird’s eye view which illustrates the location of the Dean’s Orchard as well as the door licenced by Henry VIII and steps leading down from it.

Although small, this grant had great significance. In the charter of foundation for the College of St George, King Edward III granted the Lower Ward of Windsor Castle to the Dean and Canons of Windsor [SGC X.1.5]. However ownership of its defensive walls was to be retained by the King and his successors. Although the likelihood of a siege at Windsor Castle was minimal during the reign of Henry VIII, his permission was required before a hole could be made in the wall.

Later, disputes occurred about the responsibility for the upkeep of the walls. In 1603 the outer wall adjoining the canons’ houses fell suddenly and King James I/VI held that the College was responsible for its repair. He argued that they were accountable because they had taken liberties of installing drains and opening holes for windows at their pleasure. However the College won the case in 1606 by presenting Edward III’s charter as proof of the King’s responsibilities [SGC RBK T.249 vol.ii, pp.14-15]. Nevertheless it took a number of years to repair and in Norden’s 1607 bird’s eye view the breached wall is marked.

Prior to the creation of a door in the north wall, access to the orchard would have been less direct by way of the Castle’s south gate, originally constructed in the early thirteenth century and rebuilt around 1510-11 by Henry VIII. It was renamed in the King’s honour and traffic through the Henry VIII gate is frequent. However access by way of steps and a door in the north wall of the Castle is still reserved for College members and the Choristers of St George’s who travel from the School to the Chapel for services.

Henry VIII’s licence and other Tudor era documents will be on display at our event on 4 May 2019, ‘An Afternoon of Tudor Talks’.