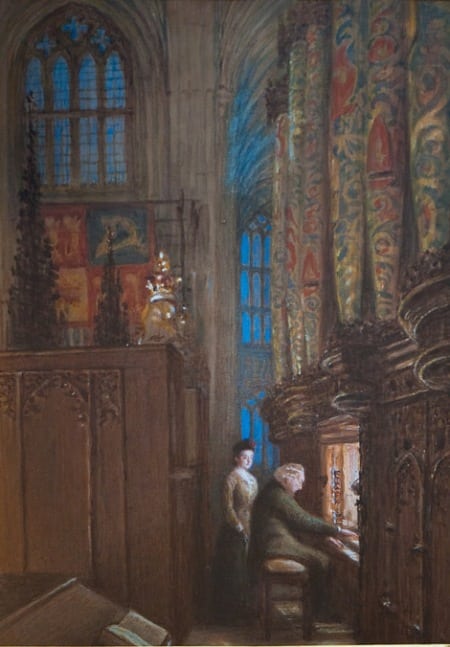 Sir George Job Elvey was Organist and Master of the Choristers at St George’s Chapel for forty-seven years, from 1835 to 1882, making him one of the longest serving Organists in the Chapel’s history. This image shows Sir George Job Elvey towards the end of his career at St George’s, the woman is not identified. It is an oil sketch for a larger painting by William Corden and shows Elvey playing the organ in St George’s Chapel, before the division of the pipes by Brakspear in 1931.

George Elvey was born in Canterbury in 1816 to a family with a long musical history. He began his musical career as a chorister at Canterbury Cathedral, where his older brother Stephen was Master of the Boys. When Stephen was made Organist of New College, Oxford, George went to live and study with him; he progressed so rapidly that by the age of seventeen he was an expert organist. He was appointed Organist and Master of the Choristers at St George’s Chapel in 1835 aged only nineteen years, beating more experienced candidates such as Samuel Wesley to the post.

On taking up his duties directing the choir, Elvey found it in “in a very disordered state” but within a few years he had restored order and built up its prestige to make it one of the finest in the country. As well as performing in St George’s Chapel, Elvey travelled with the choir to perform at historic national events, including the opening ceremony of the Great Exhibition and the funeral service of the Duke of Wellington.

As well as taking charge of the choir and playing the organ in the Chapel, Elvey gained a BMus and DMus from New College, Oxford, during his early years at St George’s. He was renowned for his dramatic performances of the works of Handel and was also a prolific composer – many of his pieces were composed for specific ceremonies and performed only once. The original music manuscripts for many of Elvey’s works are now preserved in the St George’s Chapel Archives. They include his 1834 Gresham Gold Medal-winning anthem “Bow down thine ear, O Lord”, his doctoral exercise “The ways of Zion do Mourn”, and “The souls of the righteous” – a funeral anthem written to commemorate the death of Prince Albert.

During his time at St George’s Elvey increased the prominence of the role of Organist. He was appointed as Private Organist to Queen Adelaide (wife of William IV) and later to Queen Victoria. Additionally, through Elvey’s influence and intervention, since 1849 the St George’s Chapel Organist has had the sole right to conduct musical arrangements at State ceremonials held in St George’s Chapel.

George Job Elvey was knighted on 24th March 1871 to recognise his work as an organist and composer; most specifically for the “Festival March” he wrote to be performed at the wedding of Princess Louise, the sixth child of Queen Victoria.

In 1882 Elvey resigned his post as Organist to St George’s and lived in retirement until his death; he was buried in St George’s Chapel graveyard on 14th December 1893. A window in the Rutland Chapel was partially reglazed in his memory and a commemorative brass tablet placed beneath it.