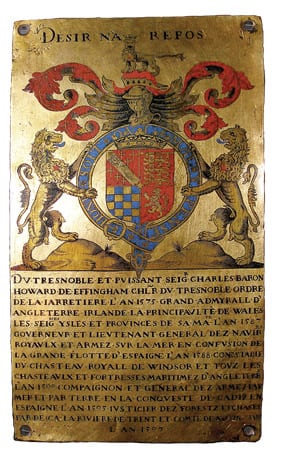 Some 800 stall plates adorn the stalls of the Quire, with the earliest, that of Ralph, Lord Basset of Drayton dating from c.1390. Their original function was not to indicate the occupant of the stall (done by the helm and crest); instead the stall plate was to act as a memorial and would only be erected after death. Very early on though stall plates were being erected during lifetime, and in 1522, Henry VIII revised the Statutes to stipulate that the plate was to be fixed within a year of installation.

The size of the plate was regulated by the Statutes, and the design and quality varies depending on the artistic taste of the age. The early plates are cut outs in the shape of a shield and crest, which changed to rectangular in the early 15th century. Today, new plates are made of copper etched with acid and filled with colour, and measure 4 inches by 6 inches. The legend is, apart from a few exceptions, in French reflecting the original language of the Statutes.

This stall plate is that of Charles Howard, second Lord Howard of Effingham and later first Earl of Nottingham. Measuring 101/2inches by 7 inches, it shows his arms within the Garter, and a lengthy legend describing his achievements. Installed in 1575, he was Lord High Admiral, and was in command of the fleet at the capture of Cadiz and the defeat of the Spanish Armada. Both of these events are commemorated in the legend, as is his creation as Earl of Nottingham in 1597. This suggests that this stall plate has replaced an earlier one, since if the Statutes of Henry VIII were followed, his stall plate should have been erected within a year of his installation. Housed in the Archives is his copy of the Statutes received on his creation.