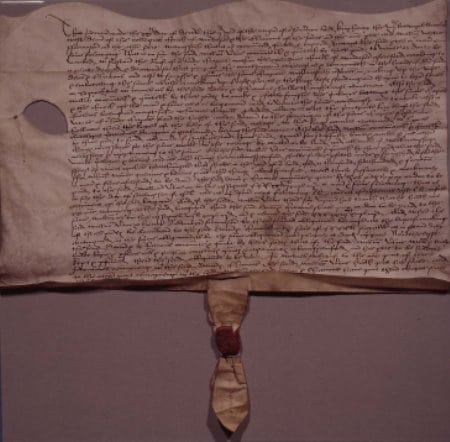 In 1511 Henry VIII was involved in the drawing up of an agreement between Dean West and master mason William Vertue for the vaulting of the Lady Chapel at Windsor and the completion of the exterior, including the buttresses, battlements and King’s beasts, for the sum of £326 13s 4d.  This contract, dated 20 December 1511 and sealed by William Vertue, survives in the St George’s Chapel Archives [SGC XVII.37.3].

William Vertue had not long completed the vaulting of the Quire at Windsor, under an agreement made with Henry VII in 1506. As part of this contact, dated 5 June 1506, the Quire vaulting, which  was supposed to be completed by Christmas 1508,  was to incorporate bosses bearing roses, portcullises, fleurs-de-lis and “any other device that shall please the King’s grace to have in them” [St John Hope Windsor Castle II pp.460-1]. In July 1507 the Exchequer accounts show a payment of £50 to William Vertue, half a sum of £100 due from “the Kinges g[rac]e and my lord p[ri]nce for vautyng of the quere at Wyndesore” [TNA E 36/214 p.172].  However, the project seems to have overrun and we know that the Quire vaulting was not completed until the beginning of Henry VIII’s reign because some of the Quire roof bosses bear badges and initials which relate to Henry VIII and his first wife, Katherine of Aragon, whom he married in June 1509.  These include pomegranates, Katherine’s heraldic badge to represent her Spanish origins, and the initials K & H in tribute to the royal couple. Moreover, it was left to Henry VIII to pay the remaining instalment of £50 to William Vertue, a payment made via Dr Hobbs, the Dean of Windsor, on 4 August 1509 [TNA E 36/215 p.21].

Henry VIII then turned his attention to the Lady Chapel to the east of the main chapel, which had been partly remodelled on the orders of his father who was intending to be buried there. However, building works seem to have come to a halt in about 1498, when Henry VII changed his mind in favour of Westminster Abbey and diverted funds to construct the magnificent Lady Chapel there which was to become his burial place. It was left to Henry VIII to restart the building programme at Windsor. In 1511 the agreement featured as the Image of the Month was drawn up between Dean West and William Vertue for the vaulting of the Lady Chapel and the completion of the exterior for the sum of £326 13s 4d. Vertue also undertook, within this sum, to complete and “p[er]fitely furnyshe the galarye bitwixt the same chapel and the church after the man[ner] and fo[r]me as it is begonnen and to vaute the same accordingly and to make also Botras butting on Maist[er] John Shornes chapel”.  [SGC XVII.37.3].

To finance the work, Henry VIII passed over the sum of £200 to Dean West in the Michaelmas term of 1511, on a warrant “for the vawtyng of the Churche, whiche is to be repaid by the Knights of the Garter” [TNA E 36/215 p.138].  However, the work was not completed and the Lady Chapel remained with only a wooden roof until its conversion into the Albert Memorial Chapel in the 1860s, when it was finally vaulted in stone.  William Vertue’s failure to provide the stone vaulting in the Lady Chapel almost certainly resulted from financial constraints. Perhaps the Dean failed to pass on the £200 received by warrant from the King; perhaps it was used for the external building works; perhaps the final instalment of the promised sum of £326 13s 4d did not materialise. A further possibility is that Vertue had not been fully paid for his work on the Quire roof and claimed the £200 for past works rather than for the new commission.

Henry VIII’s decision to be buried at Windsor with his third wife, Jane, in a tomb which he had taken over from Cardinal Wolsey, makes the non-completion of the Lady Chapel even more mysterious. Henry VIII stated in his will of 1546  that he wished his coffin to be  laid beside that of Queen Jane in a vault in the centre of the Quire but only until such time as the tomb should be completed. This tomb, which seems to have been still located in a workshop in Westminster at the time of Henry VIII’s death, was intended for Windsor. When it was subsequently moved to Windsor Castle in the reign of Elizabeth I, it was placed in the centre of the Lady Chapel which became known as the Tomb House or Wolsey Chapel. If this was Henry VIII’s intended final resting place, why did he not ensure that the Lady Chapel vaulting had been installed in readiness?  Unfortunately, unless further documents come to light, we shall never know.