Golden Anniversary of the Windsor Festival 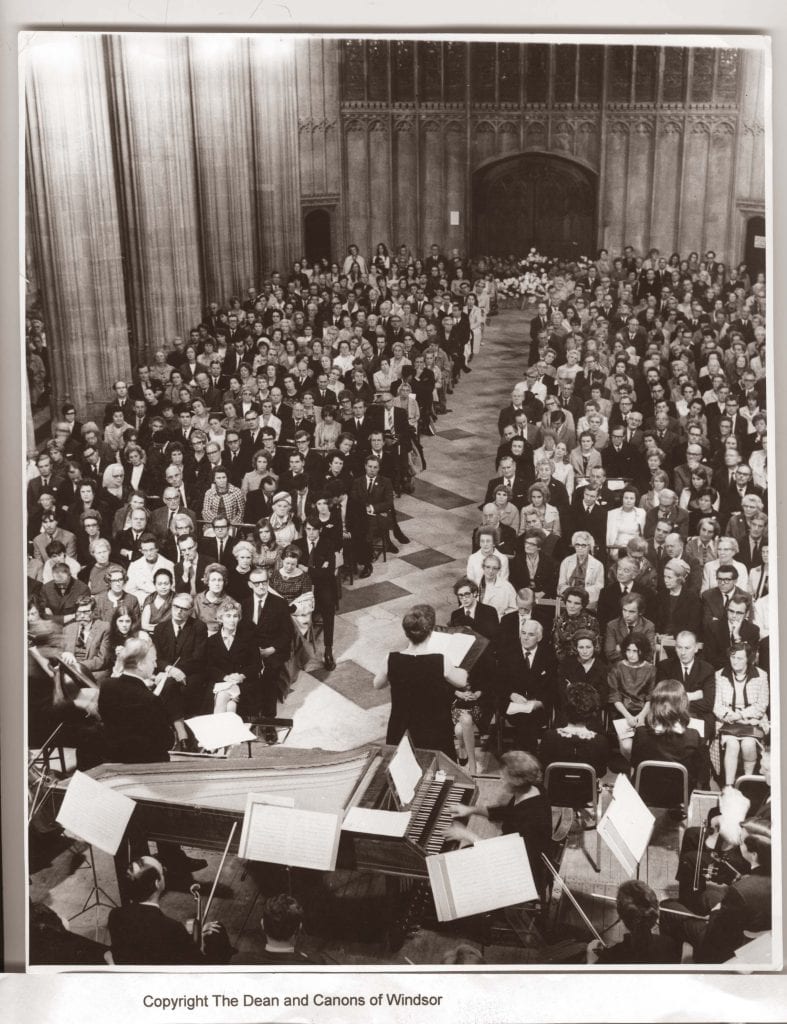 2019 marks the 50th anniversary of the Windsor Festival. The photograph featured this month was taken at the first concert of the Festival held in St George’s Chapel in 1969. The conductor was the celebrated violinist Yehudi Menuhin, who was also one of the founding organisers and co-artistic director of the first Windsor Festival.

Menuhin had first established a connection with Windsor when he performed in St George’s Chapel in 1967. The Dean of Windsor, Robin Woods, recalled: he and I began to talk about the opportunities for music and culture in this place. Even before then, I had often hoped that the Chapel, and indeed the arena of the Lower Ward, could be used for more musical and dramatic occasions. [Friends’ Report, 1969]

Discussions led to the formation of a committee, including the addition of another artistic direction: Mr Ian Hunter, Menuhin’s agent and the former Director of the Edinburgh Festival.  Together they elected to hold the Festival in September. The first festival was largely focused on music, though in the following years it broadened to include other artistic areas such as drama, art and literature.

Worship and music have been central in the daily life at St George’s Chapel since its foundation in the fourteenth century. In 1969 the Festival began with a sung Eucharist. There were two concerts conducted by Yehudi Menuhin, an evening of Music for Men’s voices performed by the Lay Clerks of St George’s Chapel, two organ recitals by Stephen Hicks and Dr Sidney Campbell, as well as a concert by the Philip Jones Brass Ensemble, Monteverdi Choir and orchestra, conducted by John Eliot Gardiner – Music for the Chapels Royal 1660-1695. [SGC CL 335]

The first concert opened with a performance of The Windsor Variations, which had been commissioned for the Windsor Festival by the Arts Council. Performed with an orchestral of the usual size in the 18th century (1 flute, 2 oboes, 2 bassoons, 2 horns and strings), there are seven variations that play continuously. Menuhin acted as conductor and Robert Masters was the first violinist and leader of the orchestra. Along with the Ambrosian Singers, led by John McCarthy, there were two sopranos, a mezzo soprano, a bass, a tenor and Simon Preston at the organ.

Rehearsals ran the whole week before the festival began. A television broadcast of the band and fireworks on the parade ground of the Lower Ward was planned and the Curfew Tower dungeon transformed into a Festival Club for artists and those involved in the planning of the Festival.

In the programme for the second Windsor Festival in 1970, Dean Woods wrote:

“Every festival is a venture. For some festivals might even seem to be a gamble, but we believe that the Windsor Festival has already received a warmth of welcome that warrants it taking place for certainly an initial two or three years… it is our hope that these days will bring a new depth of cultural and musical appreciation to an ever-enlarging circle round our Castle and townships.” [SGC CL 337]

As the 50th anniversary is celebrated this year, worship and music remain central in St George’s Chapel’s involvement in the Windsor Festival.

An Evensong will open the Festival on Sunday 15 September at 5.15 pm and is open to all.

Ticketed events include: The Royal Philharmonic Orchestra with the Choirs of Eton College Chapel and St George’s Chapel, Windsor Castle on Thursday 19 September at 7.30 pm and Tenebrae: A Hymn of Heavenly Beauty on 24 September at 7.30 pm. Bookings can be made online: https://tickets.windsorfestival.com/sales/browse-by-venue/st-georges-chapel-windsor-castle