To commemorate International Women’s Day and Mothering Sunday this month, our March blog features one of the many women who has helped to care for the chorister boys at St George’s Chapel. Mrs Wickenden was Matron from the late 1850s until 1879. 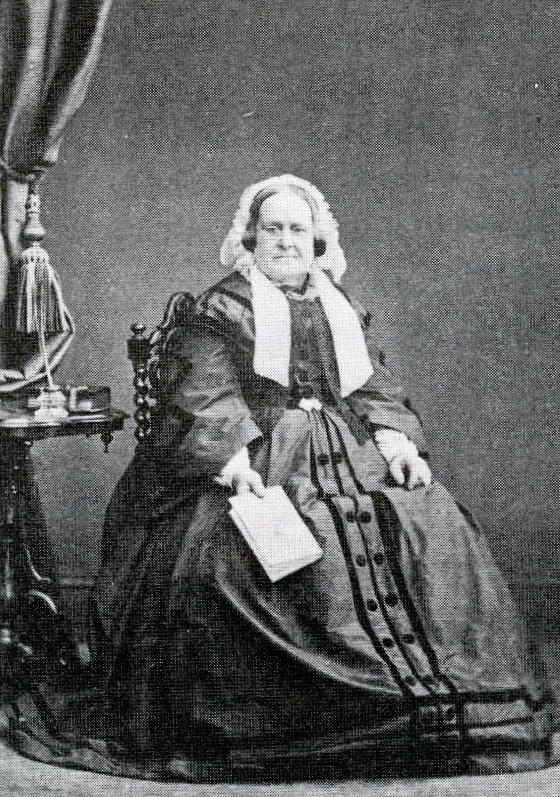 In the reminiscences of old choristers who sang at the Chapel, Mrs Wickenden is remembered fondly. Rupert Hughes (Chorister, 1876-1879) recalled that she was “a dear old lady who proved a second mother to us, in fact we called her mother and she used to salute us morning and evening in the usual motherly way.” [SGC M.141/2] Similarly, Fred Willis (Chorister, 1863-1868) wrote: “Our Matron was Mrs Wickenden, who we called ‘Mother’. She was a very kind woman and we liked her very much.” [SGC M.1077]

Ann Rebekah Wickenden, née Mynns, was born around 1805 in Southwark, Surrey. She married Edward Wickenden in 1826 and they lived in Lambeth, seemingly with two daughters, Harriet (later Hodgkinson) and Ann. Mrs Wickenden was widowed in the 1850s and in the 1861 census she is noted to be the Matron of the Choristers’ Home in the Horseshoe Cloister, St George’s Chapel. The date of her arrival at the College is unclear. The Headmaster of the school, Mr Bransom, noted that she started in 1856, but the first record of Mrs Wickenden in the Archives is from 1859, when an account was made by the Matron for the Dean and Canons of Windsor. It showed the cost of keeping the choristers’ home for that year: £119 18s 11d [SGC XIV/1859/66].

Records held in the Archives which were produced by Mrs Wickenden are primarily concerned with her work as Matron to the Choristers, including several receipts for purchases and completed jobs she sent to the Dean and Canons, as well as her board account book (1860-1880) where she recorded all purchases of food and goods necessary for care of the household [SGC XIII.B.18]. These records provide a better understanding of her responsibilities, as well as the diet and domestic routine of the choristers.

Almost weekly she purchased butter, sugar, flour, oatmeal and other standard staples necessary for a Victorian diet. In August of 1868, Mrs Wickenden sent a letter of complaint to the Dean and Canons about the butcher, writing:

[…] last week he sent a leg of mutton on Saturday for our dinner on Sunday. In spite of cooking it immediately we found it so bad that the boys could not touch it. I was forced to send it back, but of course, being Saturday, I could not return it until the next day. The butcher excused himself by saying that I ought not to have kept it so long & consequently would not make any allowance instead. [SGC I.H.2]

Unfortunately, no further records can be uncovered to determine whether the situation was resolved.

Mrs Wickenden also purchased large quantities of products needed for cleaning, including vinegar, blacking, sand and soap. These not only ensured the home was in good order, but also that the boys were clean and respectable. Fred Willis noted that she tubbed them every Saturday in the kitchen, juniors first, because they had no bathroom in the house.

In addition to the cleaning and feeding, Mrs Wickenden cared for the many ailments of the choristers with a special concoction which Rupert Hughes called ‘Mother’s Medicine’. Fred Willis claimed that this medicine was made of salts, senna and linseed tea but no orders for the latter two ingredients are mentioned in her account book, though there are several entries for ‘medicine’.

Mrs Wickenden lived at the College of St George until 1879, aside from a brief period between 1870 and 1872 when repairs were underway in the Horseshoe Cloister and the entire chorister household moved to No. 3 Osborne Terrace in Clewer. She retired in 1878 but a replacement was not found until the following year, Mrs Elizabeth Wright. Mrs Wickenden received a pension of £45 from the Dean and Canons [Chapter Acts, 5 December 1878], which she used to take up lodgings in Windsor at 11 Adelaide Square. She died on 23 June 1884, aged 79.

Mrs Wickenden is one of the characters who will featured in the new Archives exhibition, A Collegiate Community, opening on 1 April 2019 in the south quire aisle of St George’s Chapel. Entry to the exhibition is included in the ticket price for Windsor Castle.