For The King’s Christmas Broadcast, His Majesty King Charles III recorded his message from the Quire of St George’s Chapel 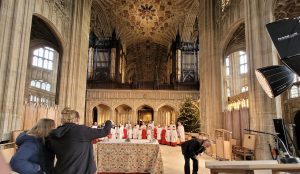 The photograph shows the Choir of St George’s Chapel, Windsor Castle about to be filmed in the Nave of the Chapel singing The National Anthem for The King’s Christmas Broadcast. His Majesty King Charles III recorded his message from the Quire of St George’s Chapel which is also where the Choir sang the carol ‘O Little Town of Bethlehem’ for the broadcast. Director of Music, Mr James Vivian, arranged the verse ‘How silently’ especially for the broadcast.
Her Majesty Queen Elizabeth II recorded her own Christmas message in the Quire of St George’s Chapel in 1999.
In the United Kingdom, the broadcast was transmitted, both on television and radio, at 1500GMT on Christmas Day. In Commonwealth countries, local times dictated the precise broadcasting arrangements. The King’s Christmas broadcast is available on the Royal Channel on YouTube (www.youtube.com/TheRoyalChannel) from 1500 GMT on Christmas Day.

As the Festive Season approaches, we at St George’s Chapel are once more looking forward to inviting you to join us in celebrating the joy of Christmas.

*These carol services are particularly popular and whilst as many people as possible will be brought into the Chapel, there can be no guarantee of space for all who might wish to attend.

Please arrive in good time and wait by Henry VIII Gate, which is the usual tourist exit point from the Castle, and the police there will let you through once the Chapel is open to worshippers.

If you are missing the fabulous Christmas Choral music courtesy of the St George’s Chapel Lay Clerks and Choristers, have a listen to these recordings:

Standing over 50ft high, Garter Tower was illuminated with images of the stained glass architecture and motifs from St George’s Chapel dating back to the 15th century, together with images from books and manuscripts in the Chapel’s library and archives and images provided by local schools in Windsor.