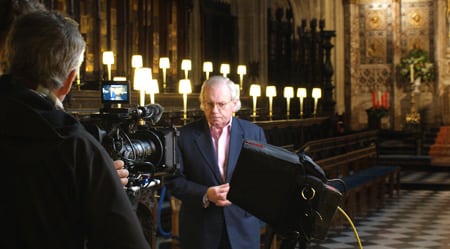 Part IV of the BBC 2 series ‘Music & Monarchy’ presented by Dr David Starkey will be shown on Saturday 10 August.

“Dr David Starkey’s exploration of how the monarchy shaped the story of British music concludes with the nineteenth and twentieth centuries –  when the crown rediscovered the power of pageantry and ceremony, and when  British music experienced a stunning renaissance.  He discovers the royal origins of such classics as Edward Elgar’s ‘Land of Hope and Glory’, Hubert Parry’s ‘I Was Glad’ and William Walton’s ‘Crown Imperial’; and hears music written by Queen Victoria’s beloved Albert, performed in Buckingham Palace, on a lavish golden piano the pair Victoria and Albert bought together (played for us here by David Owen Norris with Mary Bevan).  There is also music from St George’s Chapel Windsor, and performances from the choirs of Westminster Abbey, St Paul’s Cathedral, and Merton College Oxford (joined by Susanna Hurrell).”