St George’s Chapel and other parts of the College of St George will be shown on television over the next few days and weeks.

The third part of ‘Elegance & Decadence; the Age of the Regency’ will be shown on BBC 4 on Tuesday 13 September at 9pm and on Thursday 15 September at 8pm.  The programme, presented by Lucy Worsley, brings to a conclusion the series on the time of the Prince Regent (later George IV).  The Urswick Chantry in the north west corner of St George’s Chapel contains the memorial to Princess Charlotte, George IV’s  daughter.

A three part series on ‘The Queen’s Palaces’ presented by Fiona Bruce began on 12 September.  The second part, about Windsor Castle including St George’s and the sallyport, will be shown on  BBC1 at 9pm on 19 September.

The photograph shows a film crew at work for a series entitled ‘The Private life of the Medieval Kings’.  The programme will be broadcast on BBC4 in late October or early November.  Henry VI and The Order of the Garter were the topics covered in the Chapel on this occasion. 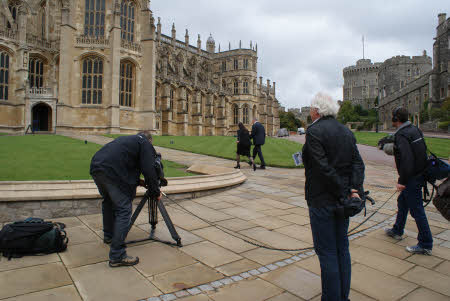