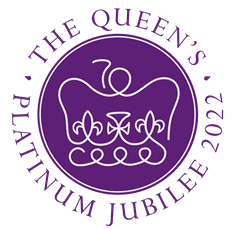 Her Majesty The Queen’s Platinum Jubilee will be particularly marked at St George’s Chapel in the following ways:

From Thursday 2 June until Sunday 5 June the Regimental and Corps flags of the Military Knights of Windsor fly from their homes in celebration of The Queen’s Platinum Jubilee.  From left to right (east to west) they are: The Royal Horse Guards (The Blues), The Argyll & Sutherland Highlanders, The Royal Logistic corps, Corps of Royal Electrical & Mechanical Engineers, The Corps of Army Music, The Royal Regiment of Artillery, The Royal Gurkha Rifles, Royal Marines, The Parachute Regiment, The Parachute Regiment, The Royal Warwickshire Fusiliers, The Queen’s Royal Irish Hussars, The Royal Scots Dragoon Guards and the Royal Army Medical Corps.

The pupils of St George’s School have gathered together to send their congratulations to The Queen. As can be seen in this short video, the school buildings lie immediately outside the north wall of Windsor Castle.  St George’s School was founded in the 14th century for the six Choristers who sang in the Choir of St George’s Chapel. Now over 300 boys and girls up to the age of thirteen attend the school amongst whom are the boys and girls who sing in the Chapel choir today. 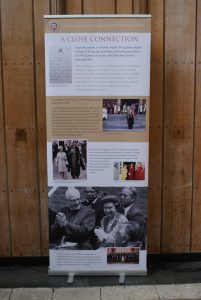 The Introit is ‘O Lord, make thy servant Elizabeth’ (Byrd); the Canticles are Stanford in A and the Anthem is ‘God is our hope and strength’ (Greene). The organ voluntary is Orb and Sceptre (Walton).  One photo shows the Chapel Choir in rehearsal. 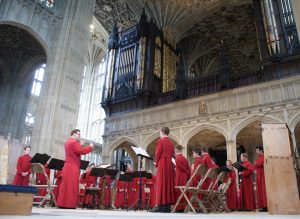 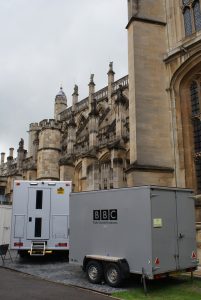 This special event celebrating The Queen’s Platinum Jubilee is a celebration in music of this remarkable and unique anniversary. The programme includes music from around the United Kingdom used on royal occasions, written during The Queen’s Reign, and premiered at this concert.  Singers from several local choirs and the vibrant and dynamic Orpheus Sinfonia, with wonderful soloists (including, from St George’s, Tom Lilburn and Miriam Allan), all under the superb direction of conductor Oliver Gooch.  Petroc Trelawny, radio and television presenter will guide us through the evening.

We are delighted to announce that the Windsor Platinum Jubilee Concert will feature the UK premier of Cecilia McDowall’s ‘Jubilate’. She is one of our leading British composers and is commissioned to write by people all over the world.   She has won a reputation as a leading composer of choral music and her extensive catalogue contains many distinguished examples.  The emotional heft of this story has clearly inspired her to produce one of her most striking scores for the medium.

The concert begins at 7.30pm. Concert tickets sold out fast but to check if returns have been made available please see : https://www.windsorplatinumjubilee.co.uk/event/musical-extravaganza-in-st-georges-chapel-windsor-castle/

Full Peal by the Bell Ringers on Saturday 4 June

On the morning of Saturday 4 June the bell ringers will attempt a Full Peal on the bells of the Curfew Tower, Windsor Castle. After a short period of ringing the bells up at around 9.30am, the Full Peal is due to start at about 10am and complete just over three hours later without interruption.  Bell ringing at the Curfew Tower takes place each year to mark Saints’ Days, the larger church festivals such as Easter and Christmas, big events at St George’s Chapel such as the Garter Service, and occasions of particular significance in life of the Royal Family such as the anniversaries of the Accession and Coronation Day.  Most of the regular ringing comprises a performance of around a little under an hour (quite often a quarter peal, being fifty minutes of continuous ringing) but for the most significant occasions, such as for special anniversaries, a Full Peal is attempted, comprising a little over three hours of continuous ringing.  The last such occasion was for the 70th wedding anniversary of Her Majesty the Queen & His Royal Highness The Duke of Edinburgh in November 2017 and prior to that for Her Majesty’s 90th birthday in 2016 and the Diamond Jubilee in 2012.  To date there have been 18 full peals on the bells going back to the first in 1749 but we hope to make it 19 on Saturday 4 June.  A band of eight ringers will ring a method called Grandsire Triples, a particular favourite having been chosen for 14 of the 18 peals previously rung.  As a “warm up” they will also be ringing (a quarter peal) on the evening of Thursday 2 June to mark the anniversary of the Coronation and The Queen’s Official Birthday.

Sunday Morning Worship (recorded in May) will be broadcast on Sunday 5 June at 8.10am. The preacher is the Right Reverend David Conner, KCVO, Dean of Windsor.  The Service includes Wesley’s ‘Thou wilt keep him in perfect peace’, which was sung at the Coronation in 1953 and Stanford’s Jubilate in B. To listen again to Sunday Morning Worship (first broadcast on BBC Radio 4 on Sunday 5 June) marking both Pentecost and the Platinum Jubilee, click here.

The Service of Evensong at 5.15pm on Sunday 5 June will celebrate The Queen’s Jubilee.  All are welcome at the service. Doors open at 5pm; please be seated by 5.10pm. 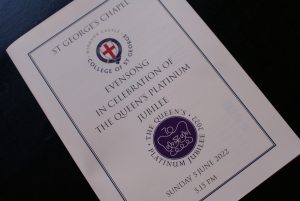