Removal of the West Window stained glass, the placement of water tanks for firefighting on Chapter grass and the continuation of payment to Lay Clerks who left Windsor to join the Armed Services were just some of the decisions made by the Dean & Canons of Windsor in the first year of the Second World War. St George’s School staff and members of the Clergy also left Windsor to join up. Tests were undertaken on lighting in some parts of the Chapel to ensure blackout rules were not breached. Meanwhile the daily round of services continued, albeit sometimes interrupted by air raid warnings.  Tombs were protected, Choristers rehearsed going to their air raid shelter and a long running debate was held about the merits, or otherwise, of members of the community keeping chickens.   As the years passed special services were held in the Chapel for many different groups including  local children, the ATS, relatives of Prisoners of War, the Red Cross, St John’s and the Home Guard. One Military Knight of Windsor, Brigadier Pelly, acted as Adjutant of the 8th Battalion of the Berkshire Home Guard during the war.

In December 1944 the Dean of Windsor, Bishop Eric Hamilton, wrote to every member of the services from the Castle community “to await arrival” together with a letter to their parent or spouse.  The following year, 1945, he wrote “At 3pm on 8 May 1945 Mr Churchill announced the total and unconditional surrender of Germany. Two hours later St George’s was thronged for a special service of Thanksgiving, the Military Knights attending in uniform.  Never has thanksgiving  been more sincere and spontaneous and not least among God’s mercies we remembered the marvel that the Chapel had stood unharmed through the long-drawn peril of total war”.

A stained glass window over the north door of St George’s Chapel lists the names of former pupils of St George’s School who died during World War II.  The Clergy, the School staff and the Lay Clerks who had joined the Services all returned alive.

In 1948 King George VI reintroduced an annual service of the Order of the Garter.  Amongst the new Knights in the 1940s and 1950s were some who had distinguished themselves at home and abroad during the course of the 1939-1945 war. 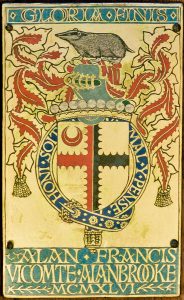 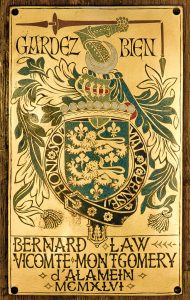 Marshal of the Royal Air Force Viscount Portal of Hungerford 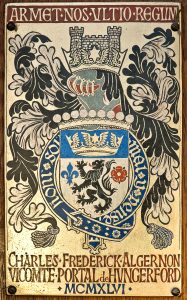 Admiral of the Fleet Earl Mountbatten of Burma 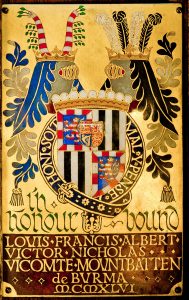 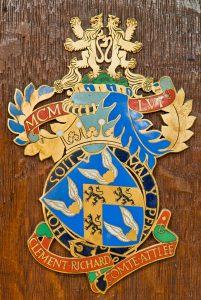 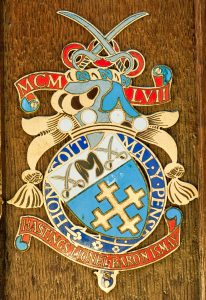 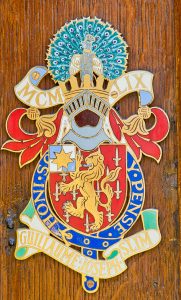