This year is the 200th anniversary of the birth of Queen Victoria, born Alexandrina Victoria at Kensington Palace in London on 24 May 1819. Her husband Prince Albert was born later that same year in Coburg, Germany on 26 August.

Royal occasions such as birthdays are often marked at St George’s Chapel with the ringing of bells and by special Chapel services. The first mention of Queen Victoria’s birthday in the St George’s Chapel Archives is from 1842 on the occasion of her twenty-third birthday. A receipt for the bell ringer’s work on 24 May was issued for 1 pound, 1 shilling and 0 pence.  He was paid the same sum for ringing on the day of Prince Albert’s birthday later that year [SGC XIV/1842/53].

Windsor Castle was one of the Royal couple’s preferred residences. Though Prince Albert died in 1861, Queen Victoria lived to celebrate her eightieth birthday in Windsor in 1899.

In addition to a special prayer and thanksgiving service held in St George’s Chapel at 3 pm on 24 May 1899 for the Queen’s birthday, the Chapel Choir sang with the boys of Eton College in a special morning concert beneath her window in the Windsor Castle Quadrangle. [SGC M.41/A/5/8/2].

Their performance included a composition by Edward Elgar with words by Frederick W. H. Myers – To Her Beneath Whose Steadfast Star. Chorister Russell Thorndike (subject of the most recent May blogpost) later recalled: ‘The last lines of it… brought tears to the old Queen’s eyes’ [1].

While her long-rumoured flories stir
The blue tide’s earth-engirdling wave,
With love, with life, her Prince and her
The All-father shield and save.
Let the Queen live for ever.
– Edward Elgar, To Her Beneath Whose Steadfast Star

In honour of the Queen’s birthday, Elgar’s music and other compositions were printed by Macmillan and Company Limited in 1899. A copy of the volume is held in the St George’s Chapel Archives and is unique because it includes letters and signatures of the composers, including Elgar, Parry and St George’s Chapel organists Walter Parratt and Henry Walford Davies [SGC MUS PR.38].

Queen Victoria’s birth in 1819 provided a solution to a succession crisis which began with the death of her first cousin Princess Charlotte in 1817. Though their grandfather King George III had nine sons, Charlotte had been the only legitimate grandchild. After her death, her bachelor uncles sought marriages, including Victoria’s father, Prince Edward Duke of Kent and Strathearn who married the German widowed princess Princess Victoire of Saxe-Coburg-Saalfield in 1818. At the time of her birth Victoria was fifth in line to the throne but the subsequent death of her grandfather, father, uncles and cousins meant that she became heir presumptive to her uncle King William IV in 1830. When he died 20 June 1837, Victoria reigned as Queen until 22 January 1901.

Throughout the following year there are a number of events taking place in Windsor Castle including St George’s Chapel to celebrate Queen Victoria and Prince Albert’s lives.

Tuesday 9 July (6.15pm-7.15pm). Victorian stained glass windows in St George’s Chapel tell stories not only from the Bible and the Royal family from Edward III’s reign to Victoria, but also of the life and accomplishments of Prince Albert.

Tuesday 10 September (6.15pm–7.15pm). The Albert Memorial Chapel is a great masterpiece of Victorian art. The evening tour gives an opportunity to enter this architectural jewel-box of marble, mosaic, and rich ornament which combines art and faith with love and loss.

November 2019 visitors to the Castle and Chapel will be able to view special displays of books and artefacts as part of Victoria and Albert: A Love for Literature. Date to be confirmed. 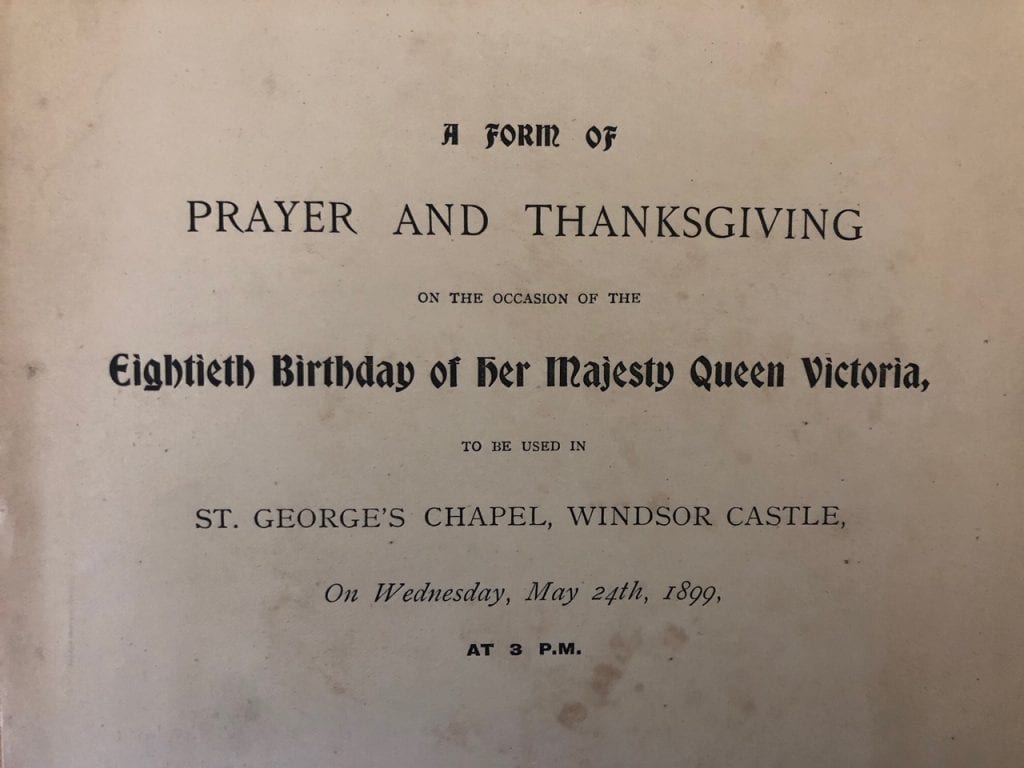