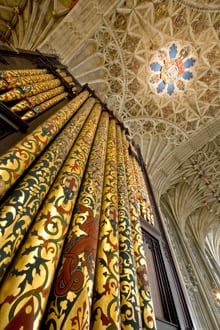 The organ in the chapel has a long and distinguished history and these instruments have been extensively documented in The Organs in Windsor Castle: Their History and Development by Roger Judd (Positif Press, 2015).  Detailed knowledge of the instruments begins in the 17th century, when the great organ-building family of Dallam built a new organ. King George III paid for a new organ built by Samuel Green in 1789 and through the 19th century improvements were made by the firm of Gray & Davison.

A drastic rebuild of the organ took place in 1930 when it was decided to move the instrument from the centre of the screen to the sides, allowing an unimpeded vista of the roof vault of the chapel. This work was done jointly by Frederick Rothwell and J.W.Walker & Son, a most unusual collaboration, if not unique. Controversially the organ was equipped with two consoles whose complex mechanisms allowed each to be played simultaneously and independently. By the 1960s this mechanism had started to fail and a further major rebuild by Harrisons of Durham followed in 1965 in which the organ was completely redesigned by Sidney Campbell, organist at the time. The organ is laid out as follows: the Swell division above the Choir Organ in the north case; the Solo Organ, Great Cornet and reeds above the Great Organ in the south case; the pedal stops divided between both sides; and the Screen Choir Organ in a separate case, facing east.

Work to the organ has been undertaken at various times by Harrisons including, in 2002, the dismantling, cleaning and renovation of the instrument and the updating of the console with a new and more flexible piston mechanism. In more recent times, a planned series of work has been undertaken to the slider actions and the winding system to ensure the organ’s reliability in the short- to medium-term. In 2019, the Dean and Canons invited Nicholson & Co. Ltd to assume responsibility for the regular care and maintenance of the chapel’s organ, and to undertake a programme of tonal and mechanical work as detailed below. Further information can be found on the Nicholson & Co. Ltd website.

1.            to increase the stability of the tuning of certain stops, particularly the reed stops of the Swell Organ;
2.            to replace other stops which were compromised due to the quality of the pipework;
3.            to re-evaluate the tonal balance of the divisions and, in particular, to consider the role the organ plays in the daily liturgical life of the chapel whilst respecting the underlying tonal concept;
4.            to update the drawstop actions to the console and provision of a Sub Octave coupler to the Swell Organ (the latter necessitating the remaking of all new jamb plates);
5.            to provide enclosed shelving for music in the space created from the removal of the old jamb-machines;
6.            to deepen the key touch depth to all manuals.

The chapel also possesses a three-stop chamber organ which was built by the late Peter Collins which is often used in daily services. This organ was acquired by the chapel in 1986 and was restored and cleaned by Peter Collins in 2014.